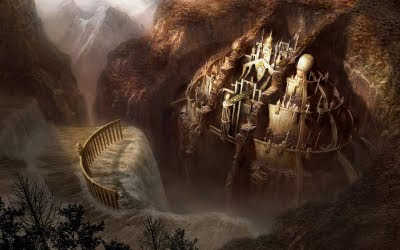 
Isybelle and BB must travel beyond the Borders of Bordavia to
rescue the mysterious Elfy, but come face to face with an evil Queen
and her insect armies who are preparing for invasion. 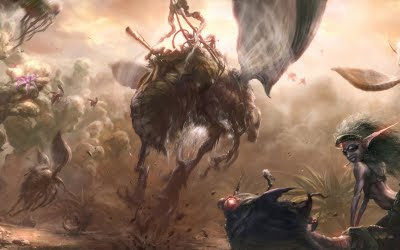 Filip felt much older than his forty-three years. The greys had sprouted like raging turnips. No wonder. He had been under an insane amount of stress. Many of his friends had died. Yet he wouldn't have time to miss them. It would soon be his turn. If he was to die, he would make certain that he was the last.
He had mere seconds to put Plan B into action. The insect guards were changing shift, leaving him alone inside the underground laboratory. The female creature that ruled the mountain who had enslaved them all was determined to leave in five days. And she wasn't planning to leave anyone behind. No-one alive that is.
Plan B would take the full five days to unfold. Working as diligently as he could, Filip went to the rack at the back of the stone room. He took a beaker of turquoise liquid from the lowest shelf. On the next row up were six half-full metallic containers that he had prepped the previous day. He took one, unscrewed the plastic lid and poured in a tiny amount from the beaker, mixing it with the liquid already inside. He re-tightened it and moved to the next one. He had to work fast. In a matter of days, the concoction inside the containers would reach a toxic level and dissolve the lid. The gasses would escape and pour into the air vent tucked away behind the rack. It would be nasty. The nastier the better.
He sealed the last container and raced back to the bench just as the door opened. A new insect guard entered. Its antennas were twitching. It studied him.
Filip’s face remained without emotion, but his hands were trembling. He hoped the guard wouldn't notice. The insects were loyal but not so bright. It closed the door and took position next to it. 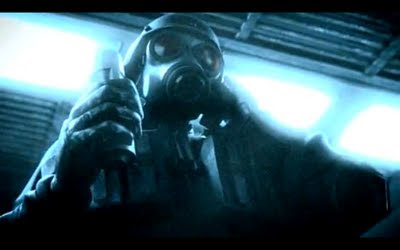 Filip would continue working now, though he was almost finished. Only a few final tests remained. He was an expert in the development of fossilized fuels, a new field of study in Bordavia. With the guidance of the dark mountain Queen he had made barrel loads of it. He had learned things from her that he never dreamt scientifically possible. The Bordavian way of life was very simple. Flight or even motorized vehicles did not exist. At least not yet. Maybe that would change if he ever got out of here. Judging by what had happened to the other scientists after their usefulness was over, freedom was unlikely. He knew that she was coming for him soon. He had to be ready.
The Queen needed the fuel so she could begin her journey from the mountain. She had been unable to create it on her own. The other scientists had been abducted for different reasons. She used them to experiment on living beings. It was nothing short of barbaric. The scientists had been forced to cross breed assorted creatures; experiments so horrible he couldn’t bear to think about it. These creatures were dangerous to their designers. Many scientists had died during the process. Though some still had hope. They actually believed that the Queen would take them with her when she left. Others thought that she would grant them a reprieve and set them free. Filip knew better. They were as good as dead already.
Everything the Queen did served some higher purpose. There was something going down, something big and Bordavia stood to be worse off by the end of it. That’s why he hadn’t told any of the others about his plan to get rid of her. It wasn’t that they weren't good people, but the Queen had a way of finding things out. Sooner or later she would come to visit him, to check the results of his final fuel tests. Plan B was already in motion, but he had to try Plan A first. If he happened to pull it off, he could escape and perhaps free the others too.
He hadn’t expected her so soon however, so when the door opened he was instantly on edge. After all this time, she was still an imposing figure. She was covered from neck to toe in a shimmering black cloak, almost like a bat. Her face was dark and skeletal, as though metal rods had been jammed beneath her skin. Her eyes were grey and without life as though nothing lurked inside. But Filip knew that she possessed a sharp intelligence. It was such a shame that she was so vicious. He grew hot with nerves and hoped his face wouldn’t turn red and expose him. 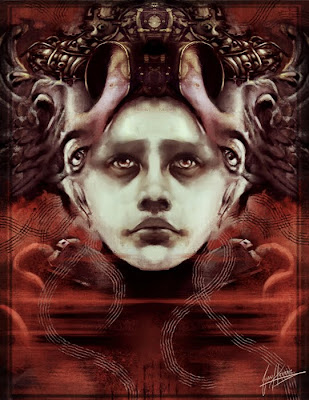 She glided towards the bench as mysteriously as a shadow. Her bony fingers flickered impatiently in the air. ‘What is your progress?’ she demanded, her voice grating like metal filings.
'I, uh, have a… minor setback.'
'A what?’ she shrieked. 'There is nothing minor about a setback!' She moved closer, seeming to fill the room. Her smell was nauseating.
Sweat grew on his forehead like tiny beads of betrayal. He reached beneath the bench, his fingers jittery, finding the vial and bringing it into view. It contained a weird mix of olive and brown fluid. He hoped curiosity would overcome her. 'I believe that this new compound will…' he swallowed, his voice threatening to break up, '… balance out the blemishes.'
'There are no blemishes!' she screeched, sounding like a sea shell being scraped against a salt encrusted rock. 'We were finished! I came for the final test results. What is this muck you present?' She bent for a closer look.
Filip thought of the people that he had come to know. There had been many Bordavian prisoners when he had arrived, only to watch them die, one at a time. He had to do this right, for them, and for those few still alive. Yet his heart was racing so fast it was hard to get the words out. 'This is the... uh... answer to all… our problems.' He yanked the rubber stopper from the vial.
She sensed something wasn’t right. Her voice went up a notch. 'Our problems? Or yours!'
Filip raised his arm to hurl the vial, but at the same time there was a dark blur and his forearm became enclosed in her steel like claw. He cried out in panic as she twisted his arm and the liquid began to pour onto the floor. 'No. No!'
The properties of the liquid changed in the open air, sending out a billow of grey smoke. He had planned to throw it on her. She should be dissolving by now, but instead the toxin lay wasted on the floor, steaming toxic vapours. The smell was horrendously sharp and he spluttered. This was bad. He knew his lungs were already melting in his chest.
She was unafraid of the fumes, so certain was she of her superiority. 'Humans are so unconvincing. I should only be surprised at how long you’ve survived.'
She squeezed harder and his muscles gave way and the vial dropped from his hand and smashed, splashing his leg. He screamed as his flesh sizzled. His legs gave way. He somehow managed to avoid falling on the liquid but the noxious gases swam all around him.
She covered her foul mouth and floated backwards to the door. ‘It makes no difference. You've already completed your task.’ She laughed like a robotic crow.
Filip could only respond with fading wheezes.
'You simply saved me the effort of executing you.' She turned towards the door, only to see the insect guard collapse, its antennas twitching like a dying cockroach. Its hand reached out for help.
She couldn't believe what she was seeing. The human might have known what it was doing after all. She panicked. Ignoring the dying guard she yanked the door open and shot into the passageway, where her Chief Insect was standing by. She pulled the door closed. 'Lock it! Lock it!'
The Chief Insect did as he was told, shutting the guard and the human in with the gas. 'What is wrong my Queen? Shall I send my troops in to investigate?'
She shook her head, sucking in huge volumes of air.
The Chief helped to steady her.
To her relief, there was no problem with her respiration. She grew calm. She even managed a cracked smile. She admired the efforts of the human, as pointless as they were. 'I have so few worthy competitors. When they’re dead, I always miss them.' She shook the Chief’s hand free and stood tall once again. 'Now we can begin.' 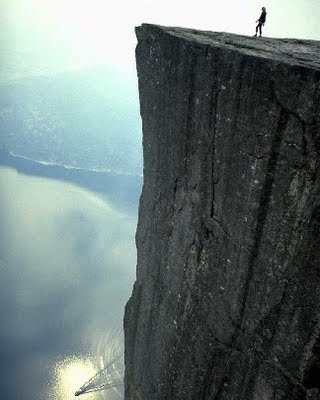 Back to the normal postings, poems, video poems, short stories and perhaps news of my writing. And I'm always happy to take suggestions.

Until then,
Thanks for your support.