An employee of a cigarette company learns of a way to steal a truckload of cigarettes. He contacts a friend to arrange the theft and they agree on a percentage cut. The friend hires two guys to actually do the thieving. The cigarettes are then given to a bunch of other, less important people to distribute them, mainly to people who can't afford them who want the cheaper cigarettes, but really anyone willing to take them. That's thousands of people.
The cigarette company discovers the theft. They decide to then sue. Not the people who did the theft, or the distribution, but Joe up the road who smoked one of their cigarettes.
This is the ridiculous situation that eventuated on the 5th November, 2010 when a US federal court ordered a single mom pay 1.5 million dollars for downloading 24 songs, (or about $750,000 per CD had she stolen it from a shop).
Would Joe being rapped on the knuckles, albeit with a gigantic rap, prevent every single person from smoking a cigarette? I don't think so.
If they really want to do something about illegal downloading, they have to do much better than this. While it's on offer, people will take it, no matter how much you enforce cheap, bullying tactics.

Clearly the music (and film) industries are at a complete loss as to how to stop file sharing. They've had over ten years now. And this is the best they can come up with?
In 2009, the Pirate Bay was successfully sued in Europe. Yet every time one of these sites is shut down, anther two open. There are so many sites on offer it’s impossible to stop them all. We are bombarded relentlessly (at least in Australia) by how much money the entertainment industry is losing and particularly trying to make us feel guilty by stressing how much the artists are suffering. If they really cared about the artists they would up the pitiful percentage they receive from their record labels. Most music artists receive between 8% to 15% share.  The reality is, these industries are making record profits, with DVD and cinema profits sales increasing every year.

Here's the real deal. If something is offered for free, most people will take it, even if they don't really want it. If you ask them to pay full price for the same thing, most won't. For example, a 100 people download an album. The music industry times that by the cost, say $20 and then claim they have lost $2000. I say bullshit. I say perhaps 5 people really wanted it, but only 2 would have actually gone out and bought it. Therefore the reality is the industry lost $40. I'm not saying it's right. It isn't. But they need to stop with the propaganda. And while they're there, restructure the industry so that there's a more of an even distribution of wealth, especially in the digital age.

You can't shoot all the smokers in order to stop people from smoking. The onus belongs with the manufactures. The debate continues. 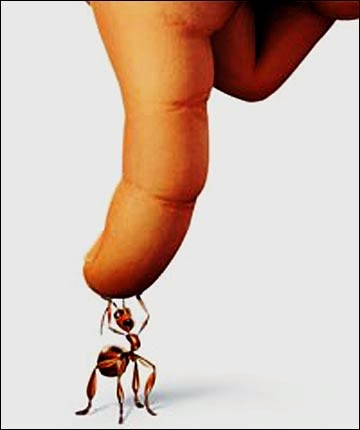 (This article does not necessarily represent my own viewing/purchasing habits.)