Bushfires: In the midst of it all... is pure chance

Written at the height of the fires, in the wee hours, while still waiting for news of my sister and her family. 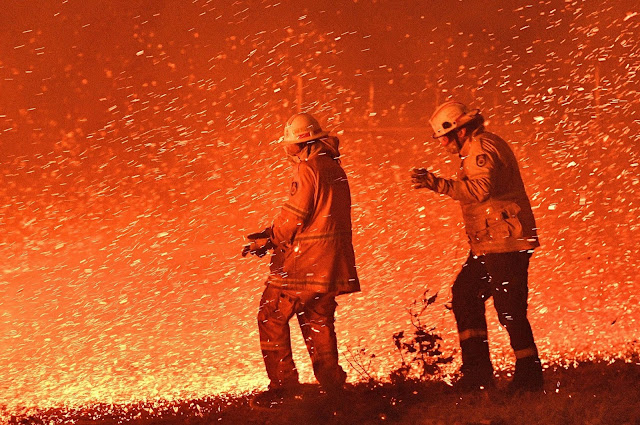 What must it be like for those caught in the middle?
For firefighters too.

A Poem in Four Parts.

Season of no Reason

She reaches for the sky
As there's no solace
In the smoky vision
Of a transient dismembered world
around her
Now dismantled
And unreliable.

A pulsating redness
Of a neglected sun
Suddenly swallowed by the black
An irrelevant
Slice of nature
Like the clean air
Sucked into soot.

She runs
Then stops
The roar deceptive
Of its true position
The only surety is the terror.

The conflagration really is
All around
And coming closer.

Nothing will save her
Other than chance
Another freak of nature
So she turns to prayer
In an atheist’s shroud
And pleads for redemption.

Exhausted
After fighting 13 hours straight
Feeling too old for this shit
He climbs aboard the truck
Like a veritable kamikaze pilot
In a cauldron of hell
He loves his family
And life
His instincts calling him to escape
But there's no one else around
To do what must be attempted.

The radiant heat
Has drenched him in sweat
And a type of purpose
Interspersed with the madness.

As skilled as they are
They have to go beyond
Even what they know
To try and reach others
They plan for a retreat
But all is not up to them.

The trees are the fuel
The wind
The driving force
The hills add speed
The houses in its path
Mere alterations in shape.

Their choice to stay
Irrelevant to a force
Of Nature
Not a Monster
Or other emotive imbued entity
At best
A set of scientific actualities
That nothing living or otherwise
Could withstand.

The impact is swift
And ferocious
Leaving dotted pockets whole
For no reason they could discern
While they instead scour for blame
Amongst the ashes.

Poetry helps me deal with my emotions. That's why it's often bleak.

Thank you for reading.