Hilma af Klint (born October 26, 1862) was a Swedish artist and mystic whose paintings were amongst the first abstract art. She created these abstract works in secret and wrote in her will that they were to be stored for 20 years after her death before they could be opened.

She belonged to a group called "The Five", a group of women who shared her belief in the importance of trying to make contact with the so-called "High Masters" – often by way of séances. Her paintings, which sometimes resemble diagrams, were a visual representation of complex spiritual ideas. Her sister's death contributed to her spiritual beliefs. Read on. 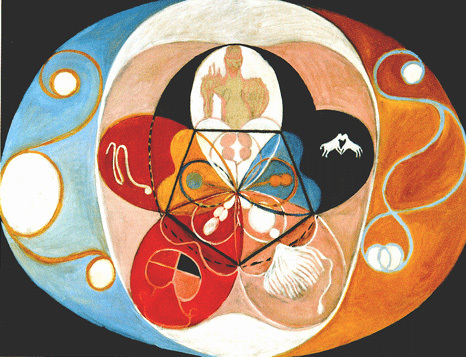 She showed an early ability in visual art, and after the family moved to Stockholm, she studied at the Royal Academy of Fine Arts of Stockholm, where she learned portraiture and landscape painting. The choice was controversial at this time, as few women had access to higher studies in the beginning of the 20th century. During the years 1882–1887 she studied mainly drawing, and portrait and landscape painting. She graduated with honours, and was allocated a scholarship in the form of a studio in the "Atelier Building" owned by The Academy of Fine Arts.

Her conventional paintings became the source of financial income. But her 'life's work' remained a quite separate practice. 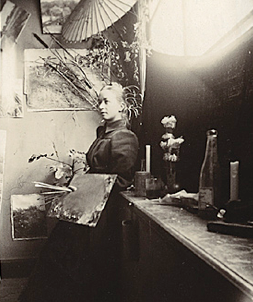 In 1880, her younger sister Hermina died and it was at this time that she began becoming interested in spiritualism. Towards the end of the 19th and beginning of the 20th century, spiritualism was very much in vogue. It's believed her interest in abstraction and symbolism came from those aforementioned interests.
Af Klint's work can be understood in the wider context of the Modernist search for new forms around this time with many changes in art, politics and technology.  However her artistic transition to abstract art took place without any contacts with the contemporary modern movements. 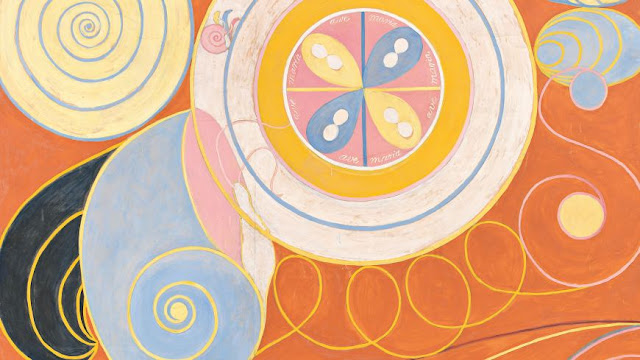 During a séance in 1904, Af Klint was told by a spirit guide that she had been ‘commissioned’ to make paintings on the astral plane. Between 1906–8 she painted the 111 paintings that comprised the beginning of the series, ‘The Paintings of the Temple’; she stopped for four years to look after her mother, before creating another 82 paintings between 1912–5. She described her working process: ‘The pictures were painted directly through me, without any preliminary drawings and with great force. I had no idea what the paintings were supposed to depict; nevertheless, I worked swiftly and surely, without changing a single brushstroke.’ 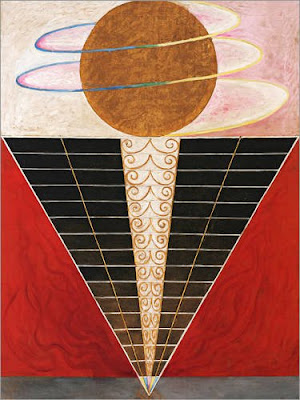 She died on October 21, 1944 (aged 81).
In her will, Hilma left all her abstract paintings to her nephew and specified that her work should be kept secret for at least 20 years after her death. When the boxes were opened at the end of the 1960s, very few people had knowledge of what would be revealed.
In 1970 the paintings were offered as a gift to the main museum in Stockholm, the Moderna Museet. They declined the donation. Nice choice. Thanks to the art historian Åke Fant, her art was introduced to an international audience in the 1980's. The first exhibition took place in L.A. in 1986.
In February 2018, The Hilma af Klint Foundation signed a long-term agreement of cooperation with the Moderna Museet, (the same Museum that earlier declined to accept them), a dedicated space at the museum where a dozen works of the artist are shown on a continuous basis. Her works are worth millions. 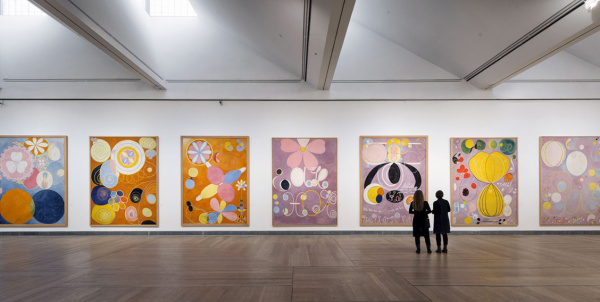