Fewer than a dozen of her nearly eighteen hundred poems were published during her lifetime. Despite some time away from the family home for study in her teens, she spent the majority of her life at the family home. Though burdened with a sick mother in her mid twenties, she chose to stay indoors, earning the reputation of recluse, particularly for the last twenty years of her life. Often she would stay in her room altogether, especially when visitors came. She died unmarried at the age of fifty six.

It wasn't until her death that her younger sister discovered exactly how much Emily had written. An initial collection was published four years later, but wasn't until seventy years after that, in 1955, that the full unaltered collection appeared.

Emily's reputation is well known throughout the world, particularly in America, but why was she so overlooked during her lifetime?


The first publication of her posthumous work in 1880 was criticized as were subsequent releases. She wrote simply but in slant rhyme, (imperfect rhyme) which was not popular at the time. Her topics often included death, a subject she discussed with friends. She was close to her cousin who died when Emily was fourteen and this left her traumatized. Other deaths over the years also affected her greatly.

Some might say that Emily suffered melancholy or agoraphobia (read depression and anxiety). Perhaps if she had been prescribed drugs, she wouldn't have shut herself away and wrote as prolifically as she did. Being so mysterious, there is much conjecture about her life, though we do know, that she yearned to be accepted as a poet. A wish unfulfilled, certainly during her lifetime.


I can imagine her sitting quietly at a desk, looking out the window at the trees and imagining a life she would never lead, or at least, pondering her mortality. She thought deeply about life, and that's something to admire.


Because I could not stop for Death

Because I could not stop for Death--
He kindly stopped for me--
The Carriage held but just Ourselves--
And Immortality.

We slowly drove--He knew no haste
And I had put away
My labor and my leisure too,
For His Civility-- 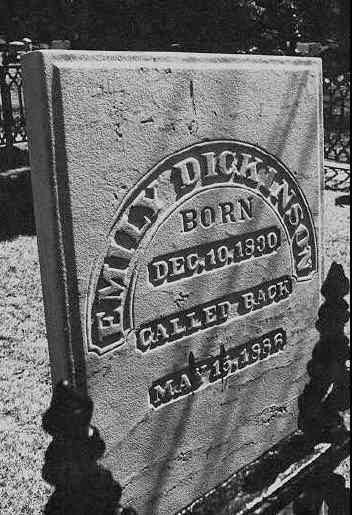 Or rather--He passed us--
The Dews drew quivering and chill--
For only Gossamer, my Gown--
My Tippet--only Tulle--

More Emily Dickinson poems at The Poetry Foundation and at Poetry Soup.


Previous Famous After Death.
My Poetry.
My Books