Drop City were a Sydney outfit that existed from 1993 until 2000.
In 1996, Fools Rush In was released as a single from their forthcoming album, This Heavenly Machine. They didnt have a filmclip for it, so I recorded them playing at a Festival in Glebe and shot extra footage and made this clip. I gave it to them and they liked it and it became the video. It played extensively on ABC's RAGE and Foxtel's Channel V (Known as RED at the time). Though I never got to meet the band or get a signed cd etc, I'm still glad I did it.
If you look closely, I managed to sneak in a couple of shots of myself and yes, I was going through my grunge/hippy phase. 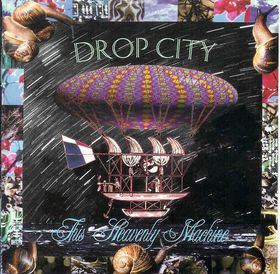 The album, This Heavenly Machine.

It was a shame to see them split up. Like many Australian bands, had they been American or European, they would have had a lot more success than they had. *Our population is just too small, and the opportunities few.) The album before this one, Magic Transitor Radio was one of my favourite albums of the 1990's.

Years later, I came across lead singer Matthew Tow who has a new band, The Lovetones, working in a Sydney record store. He served me but I didn't tell him that we had a connection.

Next week,
July is Novel month.
A synopsis and first page from each of my six completed novels.
(In reverse order).