New Short Fiction Series - Stories about Fuck All and Everything


Welcome to a New Ongoing Short Fiction Series. The stories are not related to each other, other than they should contain a little truth. Some stories are based on real events, others fiction. You won't know which is which, but I hope you find something to enjoy. 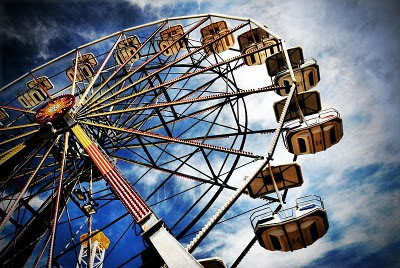 She was 16 with black hair. Her friend, 17 with blonde hair. They were both above average in looks and intelligence. They had dressed well. They travelled by train to the Easter show. It was a big yearly event. It was an overcast day and muggy. But it was a good day. They giggled at times but mostly they discussed their lives. They saw other teens but could not relate to them. They felt like aliens in an adult and child world.

The big scary rides were not for them. They decided to go on the Ferris wheel. Kinda traditional. The carriages were big enough for four so they had to share with another teen couple. A boy and a girl, a couple of years younger.

As the ride began, the 17yr old said to the couple, “Sorry that you had to share with us.”
The girl looked out, embarrassed.
“Hope we didn't ruin your plans.”
The 16 yr old nodded. She felt guilty too.
The boy merely looked out at the shrinking treetops.
The 17 yr old looked to the 16 yr old. The couple were clearly annoyed with them.
The 16 yr old shrugged. It wasn't their fault.

They all looked at the surrounding arena and the animal sheds and the paddocks and the colourful rides and as they reached the summit, the city in the distance, like a reminder of the adult world to come. This was a temporary stage in their lives. And they knew it. Still, they didn't have to worry for a little while. For today, they could enjoy the panorama. 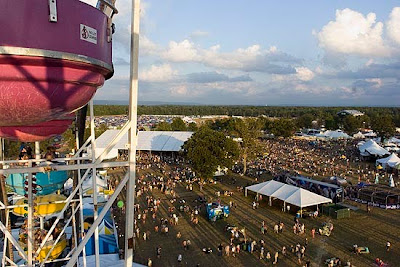 “Wow. You can see for miles!” said the 16 yr old.
“Pretty cool view huh?” said the 17 yr old to the couple.
The boy nodded, but his eyes darted every which way. Perhaps he was intimidated by two attractive girls. His girlfriend did seem a little geeky.
The 16 yr old subtly nudged her friend and then gave a slight shake of her head. Leave it alone. They don't want us here.
The 17 yr old half smiled. Really, she was only trying to make the ride a more pleasurable experience for everyone. It wasn't her fault that the couple wanted to be alone.

The Ferris wheel continued to turn and they all were taken by the changing perspective.
The 17 yr old couldn't help herself. “Been going out long?”
The geeky girl sighed, turned away and hid her face with her hand.
The boy couldn't look them in the eye either.
The 16 yr old nudged her friend, hard.
“What? Geez. Just trying to make conversation. Forget it then.”

Soon, to the relief of all, the wheel stopped. The four disembarked, the couple going one way and the girls the other. A middle-aged woman approached the couple and said, “Have a good time kids?”
“Yeah, thanks a lot Mum!” said the boy.
“I'm going to kill you!” said the girl to the boy.
“What? It's not my fault!”
“You're the one who wanted to go on! Idiot!”
The two girls looked to each other and burst into laughter.

Sometimes we are so busy looking to the horizon, that we miss what's right in front of us. 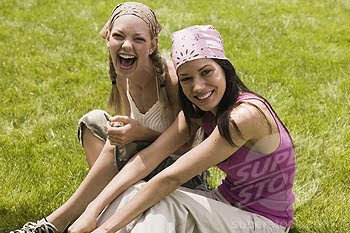