Another Rock Star Falls into the Shallow Pit that is Fame

This site is all about celebrating the written word, whether it's through my own stories and poems, (or news on my novels), or recognising crafted screenplays (Greatest Written Films). Occasionally I'll recall the work of other writers (such as a series coming soon, 'Famous After Death'), even if that person is a songwriter.

The Australian music scene lost one of its gifted songwriters this week, James Freud, singer and bass-player with The Models. He wrote some of their biggest hits. He was also an author.
James committed suicide in Melbourne after a long struggle with alcoholism. He was 51. This is a pretty cold way to sum up someone's death. This is the type of thing I've read in the papers and on news sites, but none of them describe his mentality in recent weeks, months or years. Sean Kelly also of The Models said James had 'fallen off the bicycle' when asked why he hadn't appeared at the band's induction into the ARIA Hall of Fame. Did his much publicised absence have a bearing on his mood? It was only the week before.

And yet, if you go back to the song Barbados, one of the band's biggest hits, the lyrics tell the story. 'I am the voice left from drinking,' James sings. This became the title for his 2002 auto-biography, (which I have not read but ordered). He followed it up with another book, 2007's 'I am the Voice left from Re-hab.' I'm sure these books will give much more insight into the man. For now, like those who are left to deal with the suicide of a someone they knew (and this has happened to me too), we are left trying to understand why.
Yet only one person ever really knows. And sometimes not even then. Hasty decisions are made in drunken moments.

It's well documented how the creative person often has to deal with depression and anxiety. It seems that creativity and depression are bedfellows. Some walk on the precipice between each, trying to function normally in society, but are unable to. They medicate themselves with alcohol and/or drugs in order just to get through. Creative people are really narcissists. They explore their perceptions of the world and of themselves through their work. Suicide may be the ultimate narcissistic act. It's an escape, the offer of a way out. Some may argue that it's the easy way out, that we shouldn't feel sorry for those who take their own life. If you look at the clip of Barbados, you see a suicide in the first scene. The rest of the song is about drinking and yet there must be a link. Self-fulfilling prophecy? James appears to be actually drunk, especially in the scene when he's sitting at the bar and looks up at Sean Kelly, whereas the other band members appear to be sober. And yet his talent as a songwriter is nowhere more evident and poignant than in this song.

For whatever reason, he chose this way, he leaves behind a family in pain, including his young sons whose band he was managing. He also leaves a legacy with his work, particularly in his success in The Models, who enjoyed popularity in the 80's. Prior to joining the band in 1982, James fronted The Radio Stars and had a hit with 'Modern Girl'.


And yet their success was short-lived. The Models split up in 1988 and a solo career was mostly low-key. Famously, Ian Molly Meldrum said to him after a dispute about how James was being presented on TV in 1989 on Countdown Revolution; “You're nothing but a fucking has-been. Look around you. See the new hosts of the show. They are the future of Australian music. You're on your way out now." That must have stung.

They say it's better to have loved and lost, than to never have loved at all, but having found success as an artist, only to lose it so quickly must have taken its toll on James. He almost died from alcoholic poisoning in 2001. "I was standing upon the wreckage of my youth; I probably wouldn't make it through the night and as I lay there, I couldn't help but wonder, 'How did I end up like this?'" 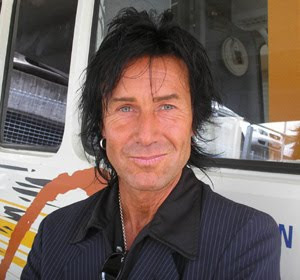 Yet he managed to claw his way to sobriety and in 2007 said, 'I'm feeling great. I lead an incredibly healthy lifestyle.'
Whatever drove him to the edge nine years ago, seems to have returned to finally claim him.