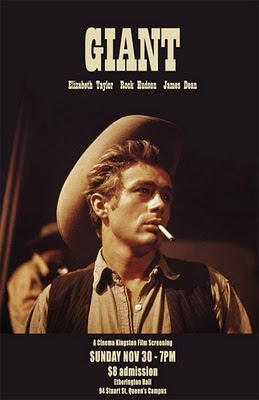 A sweeping melodrama, for certain, but with some outstanding dialogue and one embittered character in its center that lifts this to Greatest Written status.

That character is Jett Rink, (James Dean in surely his best performance) as a Texan ranch hand who comes into a small piece of land and discovers oil there. He announces to his previous employer (Rock Hudson) whom he doesn't like, that he will be richer than his old boss one day. Jett is more interested in Hudson's wife Leslie (Elizabeth Taylor). Thus begins a story that lasts decades. Passion can last just as long. So does bitterness. James Dean is afforded a long life in the film, something he was personally denied. 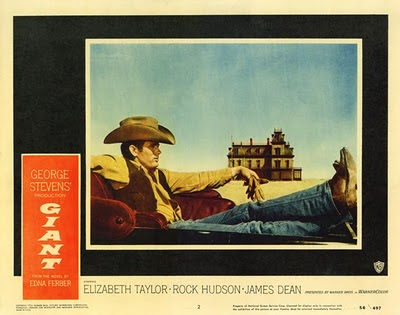 On the surface, Giant is about the Texan oil rich generations and plots the cost of such wealth. Paul-Thomas Anderson covered similar territory in There Will be Blood. (2007).

Fred Guiol and Ivan Moffat adapted the novel by Edna Ferber (1885-1968). She had other novels adapted into successful films such as Showboat. Ferber was a part of the group known as Algonquin Round Table, a collection of artists and writers who met almost everyday for ten years. And it wasn't all friendly. Lili Taylor played her in the film, Mrs. Parker and the Vicious Circle (1994).

Ferber knows how to create interesting, troubled characters, and Dean is perfectly cast. Taylor, also, is a woman conflicted, and Hudson, a husband and father desperate to cling to his family. There is also a sub plot on racism, poignant for the times, but clearly not heeded. There is much to enjoy in this epic. 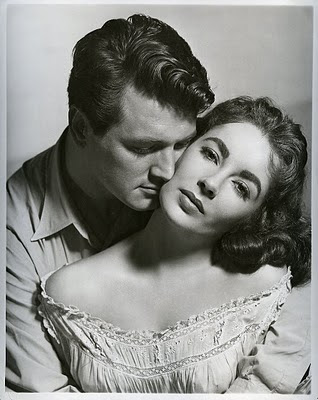 The film is brilliantly directed by George Stevens and the performances are wonderful, (including a young Dennis Hopper). Giant won a scope of Academy Awards, including Best Adapted Screenplay.
I always feel as though, somehow, the original author misses out during these award shows. Giant may be classic George Stevens, but it's pure Edna Ferber.