Here's the story of one little ingredient...


I arrived with two friends at the designated time of 4 am. There was already a snake like queue stretching back from the Opera House, past Circular Quay to the Museum of Contemporary Art. It was insanely early but people were in good spirits. I assume most of them had had little sleep. I had only five minutes. In 45 minutes we had handed in our media release forms and were herded into two groups. One were the tickets holders, the first 2500 people either through the gate, or who had registered online. These people would be involved in the second installation which was to be inside the Opera House. Talk about bums on seats. The first installation being the one on the steps.

The rest of us were herded like proverbial cattle into the park where we huddled against the cold breeze coming off the water and wish we had brought money to buy coffee from the singular coffee van. Staying awake was difficult and yet it was too uncomfortable to sleep. We had to stay here for an hour and half and there was a cut off point at which we were not allowed to go to the toilet as we were promised that when it began getting light, we would be told to move quickly. Yet it was the first day of Autumn and suitably overcast. The sun was sluggish.

I had been through all of this once before. I was living in Melbourne at the time of Spencer's first Australian shoot in September 2001 and jumped at the chance to participate. It was attended by 4000 odd brave souls, the most ever for a Tunick shoot up until that time, (now surpassed by 18,000 nude maniacs in Mexico City). It was much colder then and wet too, but it was an exhilarating experience. Where else can you strip in the middle of a city and not be arrested? This was even more of a famous landmark and in a way, was a rebellious act, thumbing our fleshy bits at the conventions of the Opera House and the City of Sydney. However this occasion was unique in that it was commissioned by the Mardi Gras. It was a coming together of Gay, Lesbian and Straight communities in solidarity, a symbol of true acceptance from all parties.


We had a plastic bag each for our clothing and finally the announcement came. Get your gear off! There was a roar of excitement tinged with nervousness and we dis-robed in record time, shoving our clothes into the bags and hoping we would find them again amidst in the sea of plastic. We joined the throng down the path towards the Opera House steps, rubbing shoulder to shoulder with strangers. You really notice the person next to you in a crowd when your both naked.

Now people who haven't been there assume you get to perve throughout, but I must say that you are too preoccupied with your own nakedness to care. And it's cold. To look at others would be to betray yourself. It's also rather creepy. Sure you do glance occasionally, it's impossible to avoid, but there's more to people than that little spot at the top of their legs. It is the face that is the most interesting part of a person. Even naked, we are still drawn to it. However I saw no perfect bodies. Everyone seemed to have qualities and flaws. This part was good but that wasn't. Had a great arse but legs were too short. You get the idea. There was every combination of body imaginable. But no two alike. I saw people with scars, obese people and people well into their sixties. All of them deserved praise.

We were put into position, so to speak, and Spencer barked awkwardly at us from his elevated vantage point. I have to say, given that he's been doing this for over ten years, his commands are haphazard. Sometimes he was even rude. The media reported that he was cracking jokes, but most of the time, we were laughing at his awkwardness. He really hasn't got any better at it. His social skills need some polishing. 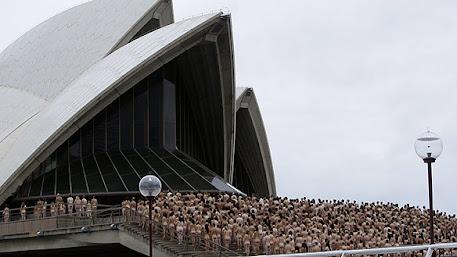 The best part of the whole experience was the absolute joy of being united, a crowd as a single entity. We were without clothes and without our individual stamps. We laughed and cheered and clapped. For the first ten minutes, I could not stop laughing. My face hurt from the stretched smile. We spoke to strangers and raised our fists with the glory of the moment. As you get older, there seem to be less and less new experiences. It's more like repeating them in different places with different people. And while this was a repeated experience for me, for others, it was a once in a lifetime event. And excuse the pun, but we were stripped bare of any status or preconceived notion of who the other person was. No single person was more important than any other. We were truly equal. We celebrated ourselves and each other with cheers of euphoria. I will never forget the sense of community, of being part of a collective. Essentially, I felt the love folks. And it felt good.

And then the media swept in. Three helicopters from each of the main networks hovered like sleazy bees, like a scene from Avatar, drowning out the instructions from Spencer. We felt invaded. Our sense of spirit and fun dissipated. The event dragged on as Spencer could no longer communicate through his blow-horn, but was forced to use walky talky to individual helpers spread throughout the 5000 people. It almost brought progress to a halt. Time dragged. It went on over an hour. People had had enough. Not only was it cold but most had been without sleep or even food and water as they had not want to run this risk of needing a toilet break mid shoot. Some raised their fingers to the sky. Sure we signed up for a naked shoot, but no one told us we'd be plastered all over the news and live morning television. This certainly didn't happen in '01. Some people were clearly identifiable in newspapers and while most had their genitals blurred, womens' faces and breasts were there for all to see. I wonder how those women feel about it. You could argue over that point but it was the choppers that frustrated me most of all. They killed the fun and it became a chore. I saw a woman a few rows ahead start to waver. I yelled out, 'She's going to faint!' but it was too late and she staggered forward and smacked hard onto the concrete. It took a little while for help to get in. Immediately I saw another woman sit down looking dizzy and distressed. The fun was over. 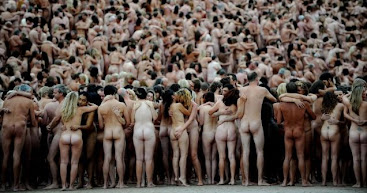 Thankfully it ended soon afterwards. It had gone on for too long. I'm blaming the media for that.
Soon we had redressed while half the crowd went inside the Opera House for Part Two. There was talk of a Part Three in the Park afterwards but most were going home. I took a train to Newtown and had breakfast. Hot food never tasted so good. Exhausted, I went home while one of my friends had to go to work, (brave girl) and already the photographs were circulating on the net. A lot of the public were already denigrating us for being freaks and for wasting the tax payers money. I spent the next hour arguing online, which is always pointless, defending the rights of those who embrace the spirit of humanity, who take risks and love life. God knows it is short. I was proud of those people. They helped me to appreciate how good it is to be alive.
https://www.anthonyjlangfordbooks.com/books
(2021 Update. I took part in a 3rd shoot. In 2020, it was a Nude at Home Shoot. No I'm not telling you which one is me. Okay, I'll give you a clue. I'm wearing a mask.) 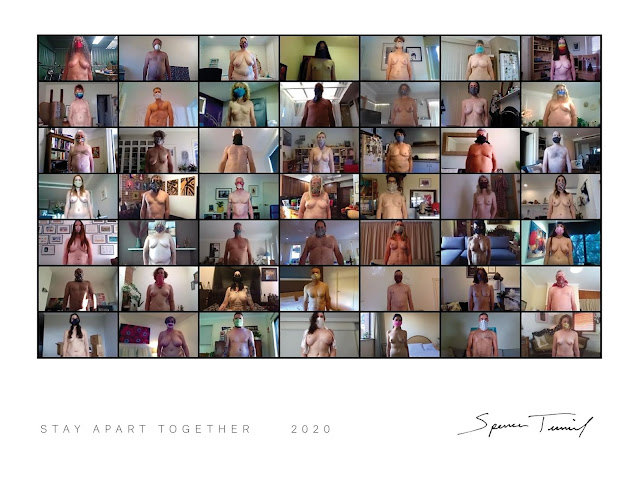