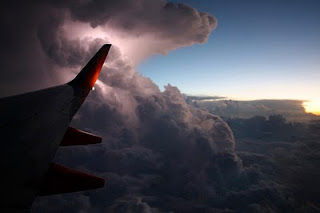 The plane shudders, your stomach goes into your throat and you feel the emptiness beneath the carpet. You've seen those movies and those horrendous TV shows and you've prayed that it would never happen to you. But now you're actually in it. This is real. You could die.

On Saturday I had one of the most frightening experiences of my life.

I have been in other terrifying situations, including a Force Gale 5 trip in a ferry across the Bass Strait. It was so rough that people couldn't walk, all the decks were closed and the waves smashing against the hull echoed throughout the ship. We were nine hours late getting to Melbourne and suffered damage as captured by the media when we finally arrived. 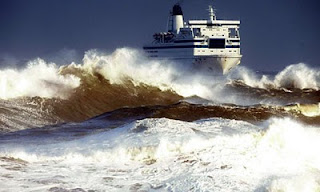 This was much shorter, but just as scary, albeit packed into one crazy hour rather than twenty-two.

I left Sydney with my daypack and the sun behind me, embroiled in a new book. A recent flight had been smooth and I was looking forward to getting some solid, guilt-free reading done during the day. The plane climbed and we broke the cloud barrier, drama free.

We were due to arrive at Tullamarine at 2:35 pm. Approximately fifteen minutes from landing, having already descended, we were told that the airport had been hit by a big storm and that it might delay our arrival, but that the storm was fast moving and shouldn't be long. Great, I thought, as it had already been bumpy for the past fifteen minutes. I had tried to distract myself by talking to a elderly gentlemen next to me. He had lived a very interesting life, combating leprosy all over the world. Yet we both fell silent as the plane dipped into a roller-coaster pit and the frame shuddered as the aircraft heaved upwards. It brought a Woooaaao from the passengers, with that half excited, half scared look on their faces. I could see the stewardess, who was seated and strapped in also. She smiled at someone so I figured if she was smiling, everything must be alright.

But it only got worse. The clouds were dark, rushing past like coagulated marshmallow. Why couldn't we pull out of them? They seemed to be causing all the shaking. We were now in a cocktail shaker, up, down and side to side, seemingly all at once. The First Officer finally told us that there was a severe storm at the Airport and that we had been put into a holding pattern to wait it out. We would circle around until it was safe to land. 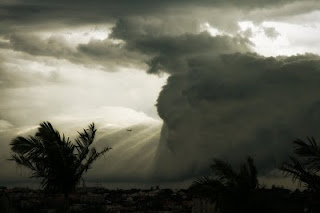 I sighed and tried to relax, but the plane wouldn't leave the cloud bank and part of our large circling path seemed to head directly into the storm. Our stomachs went into our throats and then back down again. I began burping, glad I hadn't eaten much. The passengers were silent though I could hear a child crying. I felt for the little tike, but I was preoccupied with my own fear. This was serious turbulence like I had never felt before. I have been flying for twenty five years and have landed in torrential rain and flown through storms with lightening filling the cabin and over mountains in Europe and around the world several times, but this was the worst I had ever had the misfortune to be apart of. The poor old guy next to me seized the paper bag and began heaving. I turned away, closing my eyes. It was all I could from throwing up myself.

It went on and on. A period of grace and it would start up again. Now the stewardess didn't look so thrilled. Okay, so now I'm really worried. I felt my body go cold. It was a strange, physical sensation that wasn't only in my head. The fear had manifested itself as a wave of icy water raging up my body. My heart was thumping and I could imagine having a heart attack. The plane rattled and groaned and I felt like I was in one of those disaster movies. I cursed those fucking Air Crash Programs. I swore, if I got through this, I wouldn't be on that return flight the next day, I'd be catching trains for the rest of my life. 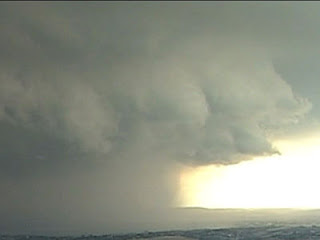 Now roller-coasters can be fun, but you know you're safe and that they will end. I didn't know either of those things. After a while, you've had enough. It wasn't just a few minutes. It was sustained. The worst was not knowing what would happen. It's all fine in retrospect but at the time... It was all quiet from the cabin too, presumably busy with dealing with the conditions.

We all can imagine what we might do or feel in this situation, but I can say that 90% of my thoughts were about trying to control my fear and wishing I was somewhere else. I wasn't thinking about the things I had yet to achieve in life or of events gone by. In other words, no life flashing before my eyes. I did think of loved ones and how lucky I was to have them but generally I was preoccupied trying to fool myself into thinking everything was okay when I knew that it wasn't.

Eventually we were told that we were being diverted to Avalon, a small airport some fifteen minutes away, which I had been hoping all along as I wanted to be on the ground and worry about the rest later. When we burrowed out of the mucky sky and those wheels finally hit the tarmac, everyone clapped. Not surprisingly, some people wanted off, and I contemplated it too, but we weren't allowed to leave. We had to wait two and a half hours to refuel and then fly back. We eventually arrived four hours overdue. I could see why we couldn't land. There was water everywhere. Melbourne had been hit by a mini-cyclone, the 'storm of the century' causing millions of dollars of damage across the city. As bad as it was on the ground, I have to say it felt like we were in the worst position of all, trapped in a tube of metal in the devil's den. It was a hellish ride, one I'm not keen to repeat. We all have to go someday but no one wants to go out in a bloody plane. Perhaps we were not in any real danger, but tell that to my frayed and scattered nerves. 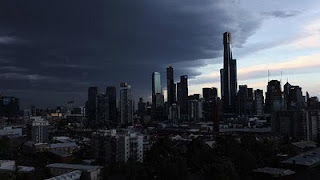 I had a few too many drinks that night and had to fly the next day, whereupon we encountered more turbulence as the plane flew back over the storm that still lingered around Victoria. I shook my head, grinned and wondered why I hadn't followed up on my promise and taken that bloody train.
Posted by Anthony J. Langford