Hunger is the story of IRA prisoners in a British Prison in Northern Ireland in the early eighties. Thatcher is in power and its a hardline approach. It's the midst of the Troubles. Between 1969 and 1981, there was a politically related murder every two days. Its not a pleasant environment in which to live. People are passionate about their beliefs, but this argument has been going on for four hundred years (and really centuries before). Things are stable, for now, but in the height of the Troubles, diplomacy is not the order of the day. 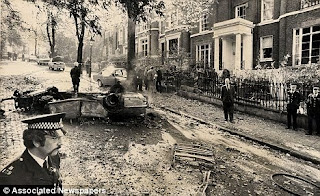 Steve McQueen is a visionary director. This films reeks with his creative touch and yet he never lets in get in the way of the story, if you can call it that. He almost lets the reins go, once or twice, but he never goes too far. In fact the film is enhanced by his mastery. It is almost a silent film, with most of the dialogue taking place in the centre (Act II). There is a 25 minute discussion between one particular prisoner and a priest, the first 16 minutes being in a single take. It is made more poignant because of the silent bookends of Acts I and III. 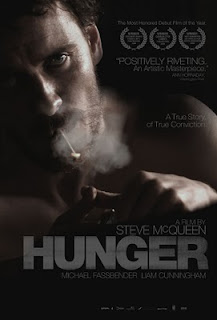 Prison is ugly and its easy to forget why these men are there. I'm sure it was easy for them to forget also. The fact that most held steadfast is a testament to their conviction. It's a battle between belief and self preservation.

Its not a easy to watch film, nor does it seek to shock like many similar films before it. It also doesn't dwell on traditional narrative structure, which would have let its commercial appeal suffer, (see The Name of the Father which contains a dynamic performance from Daniel Day Lewis or even Liam Neesen in Michael Collins), yet McQueen is not interested in the well worn path. The journey is less convoluted without the traditional character arcs and we are able to experience the horrific state of the Irish political prisoner. No matter what your stance on Northern Island, you will find it hard not to sympathise with these men who, in the end, take the only option left to them, hence the title of the film. 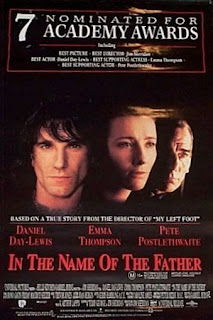 I had a chance to visit Northern Ireland in the mid 90's when a recent ceasefire still had people on edge. A group of young Catholic boys told me to f*ck off after I took a photo of a IRA mural. I did. I was also in England in the late eighties and experienced two bomb scares requiring mass evacuations. While those situations did not evolve into anything sinister, there were many such acts of terrorism in the seventies and eighties and even the nineties (the Omagh bombing), the impact of which we have had the terrible misfortune to witness. The point being that there are many faces to a politically charged environment, too many to go into here. And so Hunger exposes another side; What Came After.

Worth viewing purely for the artistic touches of McQueen... if you can stomach it.