Once upon a time in Thailand - A true story

This is based on a true story, when I was in Thailand, aged 24. 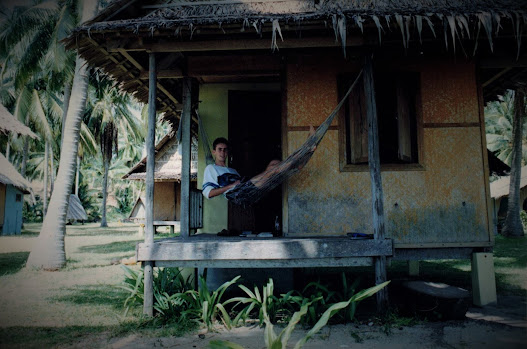 I ambled to the beach

Two hours in a hammock is enough

Where he was working on his wooden boat

A shamble of a thing for two

Yet was an object of pride

And something for him to do.

He’d been on the island for a couple of years

And his accent was the same as mine

Not too uncommon in South-East Asia

Yet, this was an under developed island

Referring to a monolithic monument

Jutting out of the sea

Stunning yes, but fishing is not my thing

He was twenty plus years older

Thanks to a Force Gale Five

In the Bass Strait

I was soon staring into the bottomless blue

The only fishing I did

Was out of a can of Thai beer

And listened as he revealed

His plan for the limited time he had

It was an era when having HIV

I wondered if he wasn’t about to

Right there and then

The beach and my hut

And the chance of seeing others

(Though there’d been none to begin with)

Hidden behind the rectangular mountain of rock.

I was too young to know what to say

Though maybe saying nothing was best

And we eventually rowed back

With a couple of fish

Considering that he had told me

That he would kill himself

The moment he began to lose his independence

As he was alone there

And I gathered the feeling

After I left a week later

That he was a man of his word.

Based on real events in Thailand, 1991

The island was Koh Pha Ngan. I believe it's quite busy now but then, it was quiet and less developed, which is why I went there. I stayed for a week on my own on the way back to Australia, having travelled for 2.5 years.

Or signed/inscribed at My Books

Please help me spread the word!

The stories include;
A man who experiences a flood of memories after the loss of his partner.
A mother and daughter’s life changing meeting.
A dramatic stand-off between the German army and villagers during World War II.
A teenager's great risk in the night they almost died.
A first-hand account of the fall of the Berlin Wall.
An eight-year-old performs her original song for a most unique audience. For all the wrong reasons.
The messiest eater in the world.
A woman recalls her dramatic life on the streets.
A unique non-encounter with a single person among the thousands on the busy streets of New York City.
An ex-Reality TV contestant seeks revenge and more.

Hope you're well. Drop me a line if you wish. Any comments/sharing greatly appreciated.