This Post is published 169 years to the day after the tragic event.

And how did he become to be involved with one of

the greatest tragedies in Australian history? 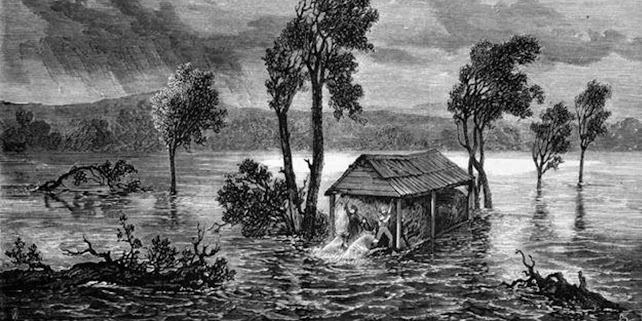 Firstly, Yarri doesn't quite factor into the rest of the Famous After Death series. While his story has been passed down, it's still barely known outside of the area in which it took place.

Secondly, he was well known after the event but it took twenty years before he and his friend Jackey were given a commerative breast plate. He treasured this plate, which hung about the neck, until he died.

Yarri's story deserves to known. It should be taught in schools.

Let's go back to the town of Gundagai, in rural New South Wales, close to the Victorian border. A time when the population was a fraction of what it is now. A time when most indigenous and non indigenous peoples lived close together and in relative peace. *

When travellers began to realise the need for  a settlement between Sydney and Melbourne, the lower hills around the Murrumbidgee was chosen. Murrumbidgee means big water in the Wiradjuri language. The fact the Europeans knew and adopted these words demonstrates the relationships that did exist between the two peoples. The indigenous people had been living in the area for centuries, perhaps thousands of years and knew that it flooded periodically and occasionally in a huge way. It's literally at the bottom of a valley. They warned the settlers not to move there.

In those days, living by a river provided water for sustenance. Drinking, cleaning etc. Behind them were steep hills. One was called Mount Parnassus. Not a mountain in the traditional sense but certainly a huge inconvenience to place a settlement there. Like the harbour and Paramatta river in Sydney, the Yarra in Melbourne and the Thames in England, it was common sense to build settlements by bodies of water. And so they did. You can see how small the river was. Hardly a threat. Right?

However, small floods would occur so people built lofts in their houses, just in case. 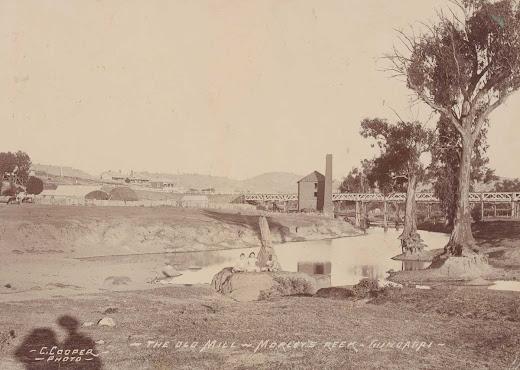 Taken from the North of the river. The Old Mill. Still standing today

In 1844, there was a larger than normal flood which swamped many homes. The people finally realised that living so close to the river was not wise. They requested to be able to move. However, the NSW State Government would not allocate further allotments, nor offer compensation if they did move. Facing a huge financial loss to a people already doing it tough, they stayed. Most lived in shacks and wooden houses and just didn't have the financial means.

Following a long, dusty drought, it finally rained. And rained. After three weeks of heavy rain, in 1852, the river had swollen and surrounded the 250 people in the township of Gundagai.

But then the rain stopped and the sun came out. Not understanding how water is captured in surrounding hills and its method of draining downwards, the people thought the worst was over. Yet, they were still cut off and some wanted out.

On Friday morning, the 25th of June, some people attempted to get out by means of a punt. It was a disaster and several people, a woman and children, drowned.

A local Aboriginal man, Yarri, in his thin bark canoe, began to rescue people, one at a time. The canoe was small. By that night, the river was suddenly rising at a rate of one metre per hour. People scrambled to their rooftops but it was not high enough. 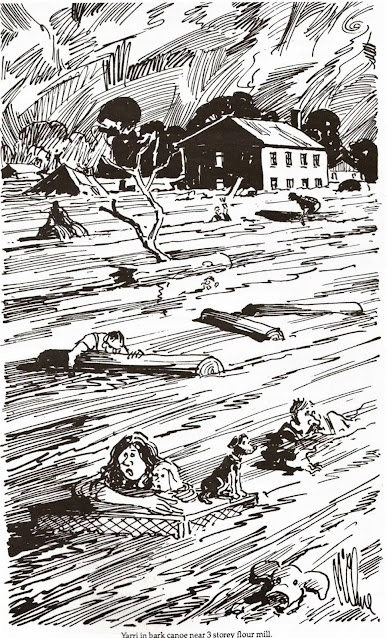 Yarri in the background, near the Mill

Another Koori man, Jackey, began doing his bit to rescue people too. There were two other indigenous men working hard to save people also. People screamed. Cattle drowned. Whole families were being washed off their roofs and from tree trunks, into the gigantic, fast paced swell. Some could swim, Many could not. In actuality, it didn't matter if they could swim. The river, especially in the darkness, was just too powerful. Often in floods, its not the water that kills people but the debris.

During the course of the night, Yarri rescued a staggering 49 people, one at a time. Imagine how long that took? Jackey rescued 20. (It's unknown how many the other two men rescued).

In one terrible incident, there were 26 people atop of Lindley Rose's Inn. Mrs. Lindley, her four children and 21 others. The water kept rising until it swamped them all. Only the mail coach driver, Johnny Clinch, survived.

To put a human face to the tragedy, many single labourers were killed. Plus entire families. Here is the names of one  family.

There are many amazing stories in this horrific night. Many deaths. Estimated at 80 dead but with only a third of bodies found, the real number is unknown. (With various travelers on the road, it was impossible to determine the actual numbers). Yet, it could have been worse without the incredible efforts of Yarri and Jackey. 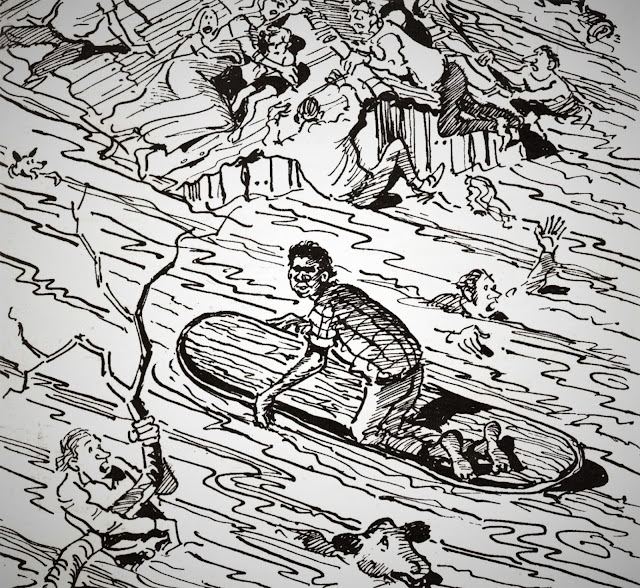 After that, the town was moved up the hill to its present location. The old Mill was left standing and is still there today. Only two other buildings survived the night. It's one of Australia's most incredible disasters. It's worthy of a movie at least. To my knowledge, not even a book exists. Children know about PharLap, a 1920's race horse, but not of Yarri and the Gundagai flood disaster.

These photos are from many years later, after the bridge was built, yet show the width of the floods that continue to occur. The old town was in the middle of that. Imagine the horror. 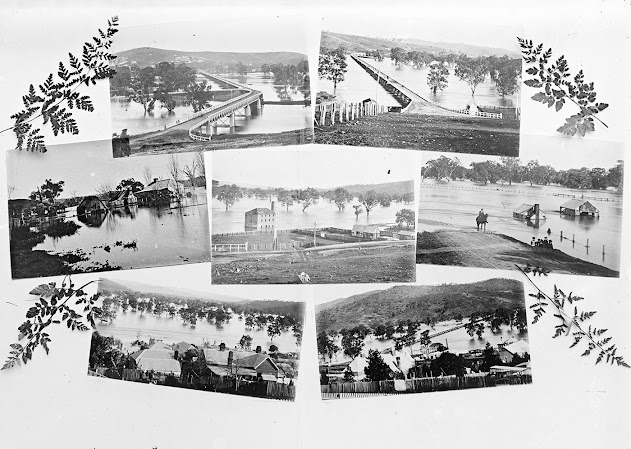 There is a small booklet put out by the Gundagai Historical Society. If you contact the Tourist Information Centre in Gundagai they may be able to arrange a copy for you. It's only 20 pages but it does contain first hand accounts. Much of the information comes from survivors and was published in newspapers.

If you live in Australia, try to get to Gundagai. There's a fantastic museum, an old jail that once housed the infamous bushranger, Captain Moonlite. A historic train station, now closed but open to visitors. And much more. It's a beautiful old town. The Old Mill is still standing and you can see the path where the original flood took place. From up on the hill looking down, you can imagine the sheer scope of that flood. (This still is taken from video I shot in April, '21) 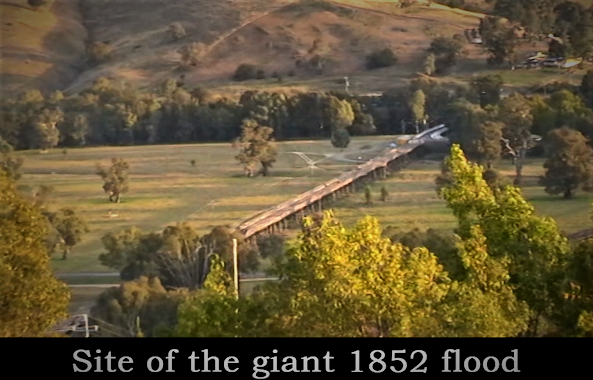 The bridge was built years later and is now abandoned.

Yarri was also honoured by the family of Fred Horsley, who in recognition of Yarri having rescued Fred, named his property, 'Yarri,' after him.   In 1952, on the centenary of the flood, the Horsley family donated a sundial in Yarri's honour. It is now in front of the town's museum. In 1980, a plaque was placed on the wall in the Museum. In 1983, a local park's name was changed to that of Yarri Park.

In 2017, a statue of Yarri, Jackey and the famous canoe was erected in the main street. 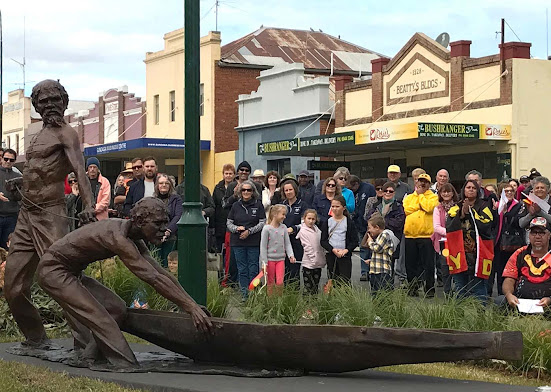 He was acknowledged in his lifetime and celebrated since. But most Australians have never heard of him. His name should be as famous as Ned Kelly's. No single person in Australian history, or perhaps in any history, can claim to have saved the lives of so many people, with no assistance, one at a time.

As for the man himself, he died years later, by a tree. The breast plate was found with him. 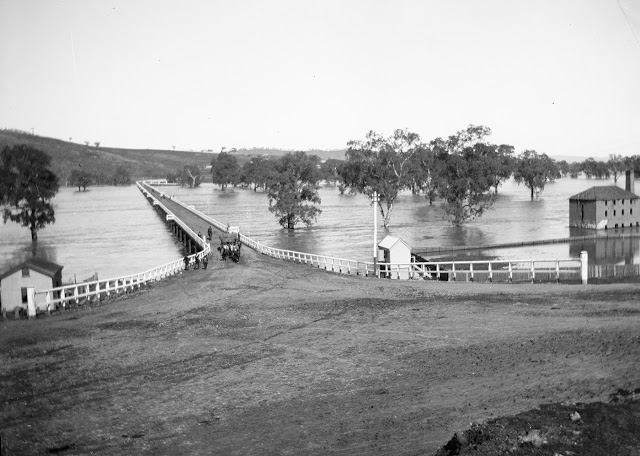 Mill to the right.

* A subject for another discussion. Despite some well known incidents, both peoples did live mostly in peace. There were aboriginal police forces in some areas (Melbourne) and entire towns set up as Aboriginal Protectorates. I grew up in one such town in Victoria. Sadly, it was European diseases that took the heaviest toll on indigenous populations. Disease and poor hygiene killed many European children too. A visit to any old cemetery will demonstrate that. Terrible events did take place but not to the extent some parties will have you believe today. The majority of people then and now are good. Most people want to live in peace. And they did. Good news doesn't make the news. There are millions of good stories every day. We just don't hear about them. But if you're willing to investigate, you can find them.

If you want to know more, I recommend undertaking your own research. Read history books. Grace Karsen's The Colony is an excellently researched book about the birth of Sydney, documenting skirmishes, but also wonderful interactions (eg. ex convicts and indigenous people used to party together every Friday night in the streets of The Rocks). While Europeans did take over the land, for the most part, people lived in harmony side by side. Yarri's own story is testament to those relationships.