An incredible insight... and now it's yours.

There's been a couple of brilliant reviews of Lone Wolf World recently, so insightful, that I'm going to share them in full here. It's great that people (but not all) are getting it, because I was concerned that they wouldn't.

The first is from Amazon US, the second Amazon Aust.

(Next Post will be The Hopeless Romantic so please look out for that one.) 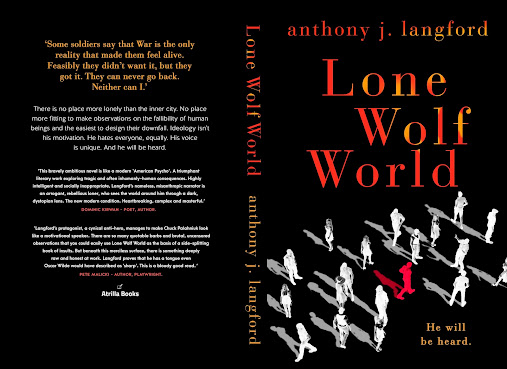 Reviewed in the United States on February 28, 2021

For the last couple of months I’ve been wrestling with how to best approach reviewing Anthony J. Langford’s debut novel, Lone Wolf World. Then it occurred to me: Reading Lone Wolf World is like watching one of Ridley Scott’s Alien movies, only told from the Xenomorph’s point of view. Sometimes it is difficult to discern what makes the bad boy tick, but it certainly doesn’t diminish the excitement of the story itself.

Lone Wolf World is an extraordinary piece of work, one of the most insightful tomes ever to be narrated by and told exclusively from the central character’s viewpoint. Unlike Thomas Harris’ Hannibal Lecter or Robert Bloch’s Norman Bates, Langford’s Lone Wolf is not cast as the villain of his piece. It is left up to the reader to determine his status and the value of his arguments. While the unnamed Lone Wolf of the title can hardly be what one would traditionally label a protagonist, he is unapologetically who and what he is, and Langford makes no judgments. 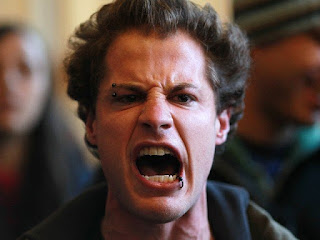 Langford’s tale begins with the Wolf taking mental snapshots of the hordes of shoppers at a local mall where, in short order, he intends to wreak havoc in a savage act of domestic terrorism. Langford’s language is mesmerizing. Despite the Lone Wolf’s contempt for his fellow man, he captures their day with a visceral poetry, referring to them as “self-importance carcasses” and “[A]pathetic bones. Deficient bones. In my way bones.” Langford, previously known for his exquisite poetry, stuns with his precise word choices that craft the coming deaths and dismemberment at the hands of the Wolf into a colorful yet grisly pastiche of horror.

What transpires next is a story filled with flashbacks that inform the reader of how the Lone Wolf became the damaged man who could perpetrate such madness. This is not an easy task for the audience, nor was it meant to be. Labels such as “sociopath” or “psychopath” could be used to easily categorize and dismiss the Lone Wolf, but they are not singularly the answer as to who he is. His psyche is far more complex and interesting to peel away in layers.

The novel whizzes along at break-neck speed, alternating between incidents that place the Wolf as prey and as predator, illustrating the dual nature of man. No matter the situation, it is his free choice that determines on which side of the scale the Lone Wolf finds himself. It is not always a clear path to either end, and that is what makes the Wolf so seemingly dangerous. He can kill without impunity but he is also clearly capable of restraint. How each scene plays out builds upon those before it, creating an increasingly taut thriller from the first page until its last. 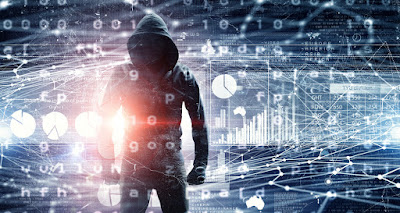 If not for the fact that Anthony J. Langford is an Australian author and his saga is set in Sydney, Lone Wolf World could easily be interpreted as a portrait of America’s post-Trump Era today. Langford is acutely connected to the nightmare of a media stoked by fake news and conspiracy theories, both of which influence and damage a mind already weakened by a troubled past. The Lone Wolf could easily have been leading the charge at the US Capitol on January 6th if he had the appetite to do so and worked well with others. His mindset, like those of the Capitol insurrectionists, is fed by an unbridled passion and an inability to sort truth from fiction.

Part of the Wolf’s charm, and he is (nearly) likeable, is his openness to expressing thoughts many readers may not want to admit they share, but do. His honesty about his feelings can be sometimes comical, yet they are also to be taken with a tinge of social embarrassment (For example, he refuses medical assistance for himself when he needs it because “The idea of the First Aid office has been as appealing as wanting to view a freshly used period pad.”) Langford packs his novel with such off-hand observations that keep the narrative spiked with chuckles and encourage the reader’s need to find out just what the Wolf is going to come up with next.

The Lone Wolf’s journey takes any number of unexpected twists, but revealing more of the plot would diminish the building tension and spoil where the story is going. There is one moment, however, that I would urge all readers to consider with a detective’s precision while evaluating the Wolf’s humanity. It takes place late in the story, as the Wolf is walking towards a highway to escape his current situation. What could almost be cast off as a simple transition from one set-piece to another is much more than that, and, hopefully, you will know it when you read it. It is the key in deciphering who the Lone Wolf truly is, and Langford expertly knits the reader’s sense of empathy to that of the character himself. For one brief moment, The Lone Wolf and the reader collide as one, and the reader will realize that the Wolf is far more than a raging killer.

Lone Wolf World is a captivating read and it will stick with you long after you’ve put the book down. I have caught myself thinking about him far more than most characters I’ve gotten to know through the pages of their novels. I find myself at times creating any number of scenarios that might have (perhaps) altered the character’s destiny or personality. Other times I wonder how his perceptions could have been changed by a better back-story so that he grew up to see the world as most of us do. Obviously, these are exercises in futility, but they show just how deep The Lone Wolf has gotten under my skin and I’m certain he will get under yours as well. This is a remarkable novel and I can’t wait to see what Anthony J. Langford has for us next! 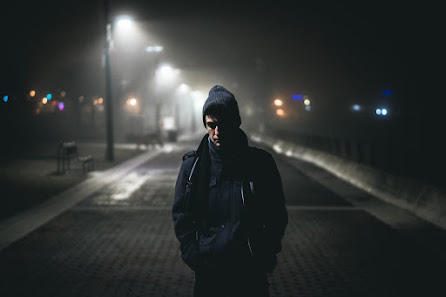 Reviewed in Australia on 14 February 2021

Once I got into this book I couldn't stop reading it. I admit, initially, reading the thoughts of an unhinged individual felt like an uncomfortable stream of consciousness. I feared I just wasn't going to enjoy this book. But, then life started to happen within those pages. And a sequence of seemingly unexpected and unrelated events occurred that pushed the main character towards an inevitable? break down. It felt like I was watching a car crash where everything just slowed down and I struggled to believe it was even happening. Did it happen? I'm not even sure!? I couldn't put this book down until I got to the end. I haven't stopped thinking about this story since!

Anthony J Langford has given real insight into the makings and inner workings of the type of people that sit behind these terrible acts. He has peeled back the facade and shown how not too dissimilar to us all they are and then at the same time shown very cleverly how small but significant events throughout their life, including how people respond to these individuals, shape them and contribute to their final act. What a read!

Purchase from the Amazon links above, or directly from the Author HERE 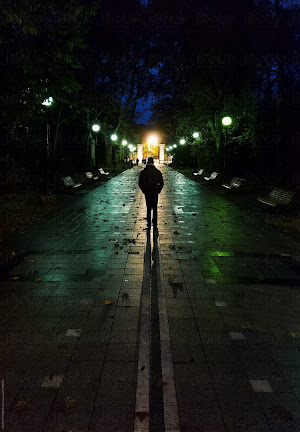 The Hopeless Romantic - A man meets a woman and sojourns into the Australian bush, remembering his past loves and failures, based on a real situation.