Believe it or not, Barbara was already famous by the age of 12.

She had written (with the help of her father), the novel, The House Without Windows. This in itself was a little ironic as it was her mother who was the writer, Helen Thomas Follet, a children's writer. Her father was a critic and editor.

It's who you know, of course, and the book was published to great acclaim in 1927. She would follow it up with her second novel, The Voyage of Norman D. based on personal experiences on a schooner. Barbara had been home schooled and had quite the different life to many. Despite the somewhat privileged upbringing and early fame, she would never know such success again.

In fact, few would know her name today. Perhaps her story doesn't belong amongst this series, yet her personal story is quite unique and is sure to surface again at some point in the future, perhaps in a biopic. She may have known fame but perhaps what came later, overshadowed her brief time in the spotlight.

Before we get to the mystery, a last word on her writing. She did continue to write. Several more manuscripts were written but would not see another publication in her lifetime. Her nephew has made one available for free online at farksolia.org 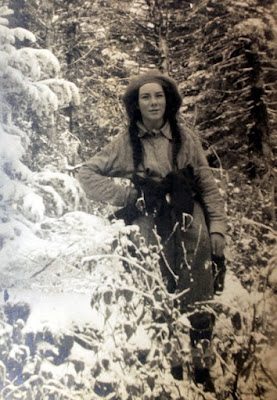 Things fell apart when her father left her mother for another woman. She was devastated. Her family fell apart, and then the Great Depression hit. Literary careers had to take a back seat as Barbara went out to work as a secretary in New York. She married while still a teenager. They were not poor and traveled throughout Europe. The early years were happy ones.

Inevitably there were problems. By her mid twenties, Barbara believed her husband was being unfaithful. She became depressed. In 1939, after an argument, she stormed out and was never seen again.
According to her husband Nickerson Rogers, that is. He didn't report her missing for two weeks. The police didn't put out a bulletin for four months.

What really happened? One can surmise. But we'll never know. Her mother certainly believed that Nickerson was at fault. She wanted the police to investigate him but this was already thirteen years after her disappearance. She believed to her death that Barbara's husband was responsible.
The media weren't made aware until the mid 60's, 25 years after the event.  Officially, it's still a mystery.

You can download her first famous book here for free
https://sites.google.com/site/thehousewithoutwindows/download-books

or visit her official site http://www.farksolia.org/barbara-newhall-follett-a-life-in-letters/