Pete 'fell' into playwrighting shortly after leaving school and has since completed five novels and over 80 plays (amongst other writings). There have been over 750 productions of his plays produced with 23 major awards won in national or international competitions. 35 of his plays, novels or short stories are published in print.

Pete, I’ve read your novel, Eyes and Knives. I do have to say. You’re a sick bastard. In the best way possible. How did this story come about? Give us a short rundown of its story.

Thanks Anthony. I take that in the best possible way.
It was actually intended as a sequel of sorts to one of my earlier novels, That Fateful Day, but only in the sense that I used two of the same characters and the same fictional suburb. The story is fairly hard to condense, but it’s about a nefarious corporation and the government agency trying to bring them down. They have developed technology to give animals indefinite lifespans (fondly titled “PermaPets”) and they are about to implement this technology on humans. Plus there’s aliens and fake nipples. 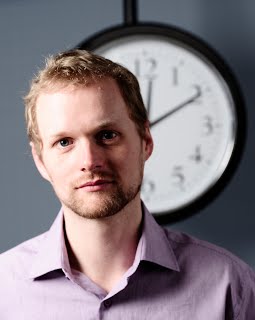 There’s a real mix of styles. Corporate politics. Comedy. Thriller. Science fiction. Is it difficult to tread the fine line between satire, action and the fantastical while trying to tell a legitimate story?

It more or less came out the way it did. Stylistically, it’s quite consistent, even though it covers a lot of ground. I’ve always find writing in a consistent voice quite easy once that voice emerges and if it works well then it’s all smooth sailing. Fortunately, Eyes And Knives was one of those books that worked well.
Whether or not the story is legitimate though is for somebody else to determine.


What was your writing process for this book? Did you plot it out? Did you try to reach a certain amount of words a day?

I made it up as I went, largely. There were some events or ideas I knew I wanted to incorporate but I just started writing and let whatever happened happen. I honestly don’t recall if I had daily targets with it, but I did stop for about six months before picking it up again.

Keeping track of the various characters and their movements was a challenge. There are many characters and many short scenes so I mapped out who was doing what on a timeline to ensure there were no continuity errors. I think I succeeded.

You’ve had a lot of success with creating short plays, especially monologues. You also teach workshops about it. But how does writing a fictional work differ to writing plays?

The parameters of writing for stage are different: dialogue and action only, words can only be heard and not read, visual and audial effects can be factored in. But the principles behind the elements which I think matter most – story and character – are the same.
A monologue – the way I write them, at least – is practically identical to a short story. In fact, I have written short stories and turned them into monologues by adding a character name, a colon and an indentation. Please don’t tell anyone I did this. It feels like cheating.


A three part question, perhaps best answered together. You’ve written other novels. What number novel was this and why did you opt to self-publish? How important is it to have your work read?

I’ve completed five novels in total and Eyes And Knives was my fourth. I self-published after years of being told “This is great, but we don’t know what the market is for it” by publishers. I thought I’d prove them all stupid by doing it myself. Of course, as a naïve 25-year-old I had no idea how difficult it was to get a bookstore to stock a book, let alone sell one. I think I still have 600 copies in my laundry room.

It’s hard to answer how important it is to be read. I like writing and having people enjoy my work. Being read enables me to write more (so long as there’s money involved somehow).
If being read was my prime motivation I’d make my work available for free (most of my plays are – www.petemalicki.com) so the short answer is, “It’s complicated.” Lots of factors come into play.

Well said. It's a tricky one for writers. So what are you working on now? And what you like to be working on in say five years?

A few things. I’m starting a book about my dating experiences, I’m working on a play which is touring China next year, and I’m creating an animation from one of my monologues.
In five years? No idea. I’m sure I’ll be working on some fun projects. No specific dreams, although writing a TV series would be ace.


Best of luck Pete and cheers for the chat.


The Sydney arm of the Short & Sweet Festival is on now until the 31st March, 2018, followed by Dubai, Queensland and more.

Hilarious skit about Checkout Supermarket workers. Worth your time.