'Honest exploration of the human psyche... brash and unapologetic.'


Thanks for coming along to chat. I've been a big fan of yours for quite a while now. Let's talk about your new book, Put a Smile on that Face. What can people expect to find?

Your book. has a unique structure to it. What was the motivation behind it?

'Put a Smile on That Face' is really three smaller books in one. Each part has a certain flow from poem to poem that is very deliberate. The three parts sort of mimic each other structurally but end very differently. There are a lot of different types of poems in the book, at least they are different from me. Following up a humourous piece with a gut wrenchingly honest heart breaker works better than being overly repetitive. Hopefully the reader is surprised by the shifts in tone and doesn't know what's coming up next. At least that's what I was trying to achieve.


Did you always want to be a poet? How did it all come about for you?

I must admit I kind of wince at the title Poet. I've written poetry and short stories since early high school. The writing bug crept up on me more when I studied at University twenty or so years ago. I majored in Literature and Drama. Although if I'm honest (and I see no reason not to be) it came about as a reaction to mental illness. 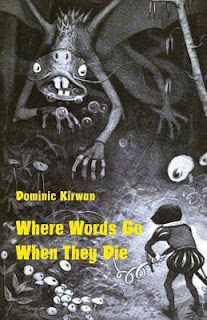 My ambition was to be an actor and right before I finished my degree I had a complete mental breakdown. In my mind I had lost everything and was devastated when I realised that performing and acting were going to be very unrealistic professions to pursue with a diagnosis of Schizophrenia. So I started to write more and more. Initially it was a few poems every day in order to express the hell I was going through. The poetry was by and large dreadful of course. I was preoccupied with hiding myself and my thoughts in my poetry – which in turn made them very cryptic and quite disorganised. A lot of them were word salads and made little sense to anyone but me. But I stuck at it and kept putting it out there. Eventually Ginninderra Press picked up a manuscript from me which became my first book 'Where Words Go When They Die.'

How much of the person is in the work? 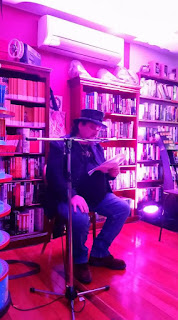 A hell of a lot. I'm brutally honest and I rarely hold back. I'm more interested in authenticity and exploring extremes, even if they are everyday, banal ones. Don't get me wrong, a lot of my poems are complete fictions, but I pour every ounce of myself into them. Still, my books aren't therapy –  I write because I absolutely love it.

Do you find Australia a difficult place for a writer’s work to be noticed?

Yes. But I suspect it's the same in most countries. I'm clueless about self promotion (and I mostly hate it) and I'm not very adept at utilising the internet to get my work out there. But I'm lucky to have a solid publishing company behind me. Most people don't really care about poetry at all, in fact I get the impression the average person loathes it. You can't be in this to make money. It's just not realistic. It's not that I lack ambition – I just think it's a tough thing to sell. It's hard enough to get people to buy your book on Kindle let alone in physical form. I suspect the art of real, beautiful, tangible books is dying if not almost completely dead. It's a great pity.

How do you write? Do have a process of working?

Sometimes sporadically. Sometimes for intense, elongated periods. Other times I don't write for weeks at a time. One thing I lack is discipline. Although when I'm inspired and on a creative roll, I find it hard to stop. I over edit the hell out of everything I write also which can be a stifling factor.

What would you like to take on in future? Do you have something planned?

I have a long, long time in the works novel called 'The Holy Babble' to finish. Once again though, major publication for a novel as weird as mine (or even at all) tends to be a bit of a pipe dream. I'm one hundred and thirty thousand words into writing it and I'm still struggling to find the impetus, and an interesting, original way to finish it.
I'm currently working on a manuscript for a book of short stories. I have about twelve or thirteen short fictions ready to go.

Most importantly I have an almost completed manuscript for my next poetry book titled 'Miracles Become Monsters.' If everything goes according to plan it should come out late next year.  (2018)

Cheers Dominic.
Best of luck to you and hope to talk to you again soon.