Jamie Hutchings has spent over twenty-five years in the music industry. Perhaps best known for his role as lead singer/songwriter/guitarist in the band Bluebottle Kiss. They produced six blistering albums and numerous E.P.'s from the mid-90's onwards. A band much under-rated, despite excellent reviews and passionate live performances. His body of solo work is also significant and impressive. Having long been on his mailing list, I reached out to him recently.

Thank you for coming along for a chat Jamie.

You’ve inhabited many incarnations over a long career from Bluebottle Kiss to solo work, your new album with Peter Fenton under the guise of The Tall Grass and much more. Do you have a favourite persona per se?

Not really, each one seems a reaction to the last one. Sometimes it’s circular and other times I go outside of that as well.

What is it that you’re trying to accomplish with your current fundraising project?

As I release things through my own label now I don’t really have spare change to press vinyl, CDs or publicise my work. The crowd funding campaign gives me an advance on that so that I can do it properly. It’s labour intensive but it’s a nice prop having people regularly involved and giving cool feedback. It gives you a kind of gauge in regards to interest in your work.

Is it tough being an artist in Australia?

I’d say it’s tough being an artist anywhere. Some people or a lot of people see art as an option where many of us see it as an essential. Most Aussies probably belong to the former camp and it’s more difficult to reach people outside of Australia. Still, given how sick the world is at the moment you have to be grateful for what we have here. 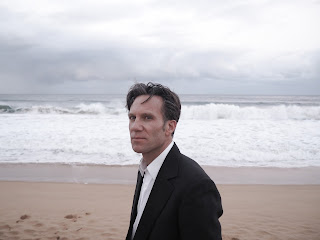 Is it important for an artist to have their work heard?

Not for everyone but it is for me. Your work is transformed by the way the outside world interacts with it. My writing and performing improved so much when I started doing it publicly, and when it comes to performance so much of it is informed by the people present and the room it takes place in.

How do you work? What’s your process?

Some of it is just work, banging away until something sticks. The best way is to turn off to turn on. Somehow disengage whilst your playing and then have something form unconsciously. Some songs have come to me in dreams, but not enough. Generally it’s a germ of an idea and then an expansion from there. The arrangement and words take the longest.

Going back a little… How did you get from the kid in the bedroom to the lead singer on stage?

The short version is that I realised that if I wanted to record my songs I would have to sing and play them myself. Then I realised that friends are probably polite about what you do at best,  so you have to take a leap of faith and try playing your music to strangers.

What were your musical influences then? How about now?

When I first started trying to write songs I used to listen to Steve Kilbey from The Church’s lyrics a lot, just allowing those stream of consciousness colours to flow freely at first. But early on the collision of noise and melody, sweetness and dissonance really appealed, so a lot of those noise rock bands from the late 80’s and early ‘90s from the US - Dinosaur Jr, Afghan Whigs, Husker Du, Replacements etc.

I still like that sort of music but I find myself more and more attracted to music from another time. Old folk singer/songwriters, instrumentalists who play off the field more like Sonny Sharrock or Pharaoh Sanders. I love the sounds of 60’s and 70’s soul and blues artists too like Irma Thomas or Dr John. I also seem to listen quite a bit to post punk and pre punk artists like The Pop Group or Television lately.


What can we expect from you in the coming years?

I have a very stark solo record due for release in early 2018 called Bedsit. That’s the one I’m crowd funding at the moment. It’s a minimalist singer/songwriter album with a strong ambience to it, self recorded in an old shearing shed.
I’m also working on some demos, hopefully for Infinity Broke. It’s hard to get that band together but I was very rhythmically influenced by my travels through South America last year and wrote a lot over there. The material definitely lends itself to the Infinity Broke assault.

Thanks for the chat Jamie. Looking forward to the album and whatever else comes along.

You can pre-purchase the album Bedsit and actually help it to be made.

Only until Mid November. Get in quick!

Free streaming songs that you can also download. Here