Nominated for the Pushcart Prize 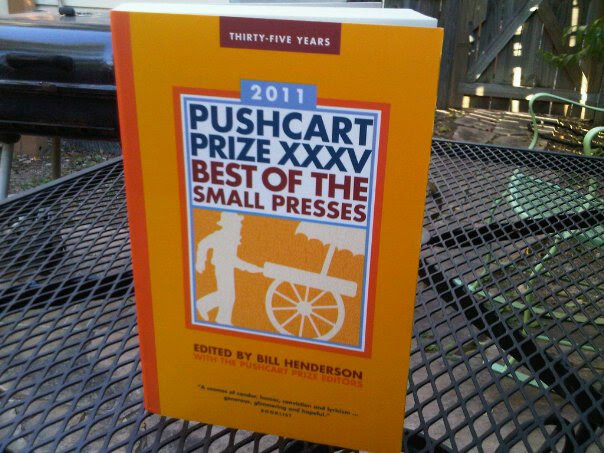 I'm thrilled to announce that I've been nominated for the Pushcart Prize. If you've never heard of it, it's basically the best of the small press publications. It is published through Pushcart Press and was created in 1976 by Anais Nin and quite a few others to celebrate the little guy, outside of the mainstream academic literati. It's a wonderful tradition and hard to believe that I am now part of it. Many of the small press publications from around America and indeed the world submit their best stories, essays and poems (only two of each). The judges select a final list to be included in an annual publication. It's not really a prize per se, but more of a celebration of struggling writers and poets. Many famous writers obtained their early break with the Pushcart, including Raymond Carver and Joyce Carol Oates.


I'm simply happy to be nominated. If I don't make the final list, that's fine by me.

The acknowledgment is for my story, City of Great Large which featured in Wilderness House Literary Review in the Twenty Eighth issue (Volume 7, no.4). The W.H.L.R. are based in Boston. The story was published back in January '13 and is available here as a pdf. They chose my story and one other as the best fiction they have published in 2013.

City of Great Large was written in the courtyard of a temple in China, not unlike this one. I sat on the edge of a concrete step and scribbled out much of the first draft on the spot in fairly humid conditions. I continued working on it and finished it while still in China and re-drafted it when I returned home. It wasn't until after ten rejections that it was finally picked up on the eleventh attempt.

The story itself is simple, a young man must go off to the city to find work, quite a necessity in China and obviously common in most parts of the world, yet I used a type of broken English I picked up from the streets, so the writing became almost a type of poetry. English is not widespread, certainly not like some other Asian countries and communication was mostly difficult, especially outside of Beijing and Shanghai. It was fun to write, it allowed me a lot of scope, yet it's emotional and as truthful as I could make it.


This is the greatest recognition I've received thus far and though you still hope for the future, I would be content if this is as good as it gets. One shouldn't get greedy. Along with the publication of my first poetry collection, Caged Without Walls a poem of mine was also included in the Vine Leaves Literary Journal's Best of 2013. I've had many other poems published this year, including my first in another language. It tops off a bloody good year.

(insert smiley face and a hand raising a beer).

If I make the final list however, (for the 2015 edition published mid next year), you'll be the first to know.