The trial of Jodi Arias

A bloodied body is found in the shower. A man of 30 had been stabbed 27 times, shot in the head and had his throat slit to near decapitation. 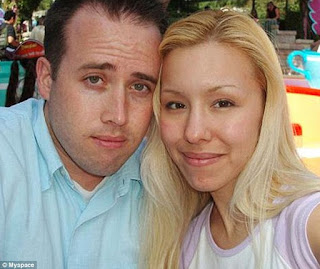 I've become quite enthralled with this case and have followed the trial since the beginning. (It's being  streamed live). As of this post it's still going. I've written a poem from her perspective, but first a brief background from Wikipedia:


'The killing of Travis Alexander occurred on June 4, 2008. Alexander's body was found at his home in Mesa, Arizona; his wounds consisted of 29 stab wounds, a slit throat, and a shot to the head; the death was ruled by the medical examiner to be a homicide.

A criminal trial began on January 2, 2013, for Alexander's ex-girlfriend, Jodi Arias, who was charged with his murder. Arias pled not guilty and testified on February 6, 2013, that she killed Alexander in self-defense. The case has received widespread media attention.'  (end).


Part of the reason why it's so interesting is how articulate Arias is. She's also a compulsive liar, which has been evident all throughout the trial. First of all she said she was never at his house. Then she came up with a story that two intruders killed him and she miraculously escaped. After two years she changed her story yet again to that of self-defense, claiming battered wife syndrome. In court, she dropped a bombshell by claiming that she walked in on Travis masturbating to a picture of a boy.  Her poor family have had to endure a second assassination, this time of his character. There has never been a shred of evidence to back up any claims of abuse or otherwise. Travis was a Mormon yet the trial has been saturated with stories of their sex life, including a one hour phone sex recording.


The prosecution is trying to prove premeditation, as Travis was moving away from Jodi and I believe that she did indeed plan it. There's much more to it of course. This is a death penalty case. I don't believe in the death penalty but I do believe that she should never be allowed out. She is a psychopath and wouldn't be surprised if she did something similar again.

I’m an artist
And a photographer
In the light
On the crest of a golden wave
In echelon fields
Where the chosen ones dominate.

I’ve lived for a thousand lifetimes
And probably a thousand more
And even if I didn’t
There’s been none like me
For generations.

I’m a survivor
I’m a winning streak
Golden Ticket
That should be respected
More than I am
Who is taking charge
Of her destiny.

I take no prisoners
And give no latitude
As idiocy has threatened me
Too often
Like a scolding bubbly soap
Of bullshit
I can no longer swallow
If they cross me
They will know it
Not the sting of a mosquito
But the death grip of the python.

I’m being dramatic
But I’ve always been special
I don’t care that it sounds conceited
Because I’m simply not ‘some people.’

Respect will be given
And I’ll start with him.

(Written during the trial of Jodi Arias).

If you're interested to know more, chase down a 48 Hours episode called Picture Perfect. A good starting point.
No doubt, a movie will be in the cards.

I was so caught up in this trial that I sent a card to the Alexander family. We should always think of the victim first. Family second. Perpetrator last. I received a reply. It was very nice.

Great to see Arias where she belongs and where she will spend the rest of her life. She epitomizes the word 'evil' with no remorse and disgusting conduct throughout all of the proceedings that followed this awful event.