MAGNOLIA (1999) is by the film’s creator own admission, his masterpiece. Something I agree with, though many critics site THERE WILL BE BLOOD (2007) as the better film. 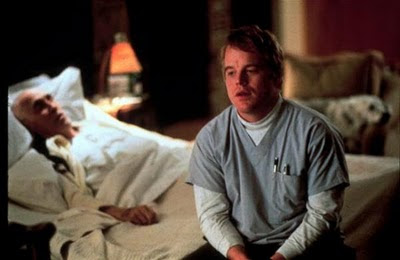 Paul Thomas Anderson had such a success with BOOGIE NIGHTS (1997) (and many of the cast return here), that he was given free reign with his next project, an ambitious opus on character with interweaving threads. Initially he wanted a small film, but it literally ‘blossomed’. All of the characters are associated in some way, though their journeys remain uniquely separate, such as the petals of the Magnolia flower. Some of the characters include a nurse played by Philip Seymour Hoffman, a child genius, a TV show host, a wealthy man who is dying (played by Jason Robard’s in his last film role) and a memorable performance by Tom Cruise as Frank T.J. Mackey, a loathsome sexual self-help guru for men. I’m not a fan of Cruise but in this he is hilarious yet tragic. The casting throughout is perfect. 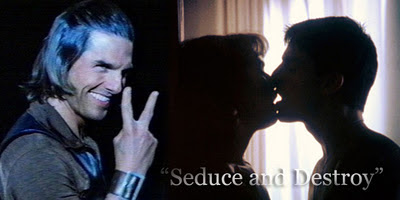 All are in battle with the self. Tortured, isolated, lonely and in search of redemption and yet none seem to realise that they are indeed connected. The film’s other themes are coincidence, set out in the incredible prologue and the implausible made plausible, such as the frog rain. There is nothing more outlandish than real life. These themes are also metaphoric for certain people coming together, such as the cop and the drug addict. Everybody’s searching. Everybody seeks to be noticed. To be understood. This really opened up the scope of small things made grandiose, leading the way to films like CRASH (2004).

Incidentally some have seen the spellbinding frog rain scene, which is incredible and unique in cinema, as a reference to the Bible. Anderson claims it came from a story told to him by Philip Baker Hall who experienced the phenomenon in a storm while driving in Italy. There are various records of this occurring in history (though in heavy rain) but some still struggle with this scene. I find it astonishing.

This is a bold film. There is a scene where the main characters each sing a different part of a song, especially created for the film by Aimee Mann, even though they appear in the scene on their own. This doesn’t happen anywhere else in the piece and takes place in a tense dramatic period. Each of the lyrics relate to the characters own story. Somehow it works. In lesser hands it would have been laughable. I’ve never seen it attempted before or since.

Anderson creates his mosaic from his desire to work with certain actors and even wrote parts especially for them. He went away, isolating himself in a small cabin for two months and came back with this artistic powerhouse, refusing to alter a word. At three hours, it is an amazing labyrinth of angst, suffering, fear, longing and regret tied up in exquisite soul bleeding dialogue. In some ways it is the nephew of NETWORK (1976), a film Anderson showed to the cast before filming, also an ensemble piece centering around a Television show as Anderson also worked on a quiz show before making his foray into film. 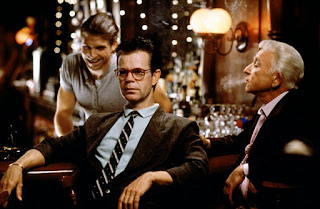 Brilliant in direction and acting, the film was nominated for several Academy Awards, including script-writing, but lost to AMERICAN BEAUTY, a good film, but not in the same league. In the same way that THE SHAWSHANK REDEMPTION (1994) was overshadowed by THE ENGLISH PATIENT at the Oscars, time has revealed the error. This is by far a more complex and artistically successful film. I’ll go as far as saying MAGNOLIA is one of the best American films for the past thirty years, certainly in terms of script. Let’s hope Anderson has many films left in in him yet, though (as he also believes), may never top MAGNOLIA. 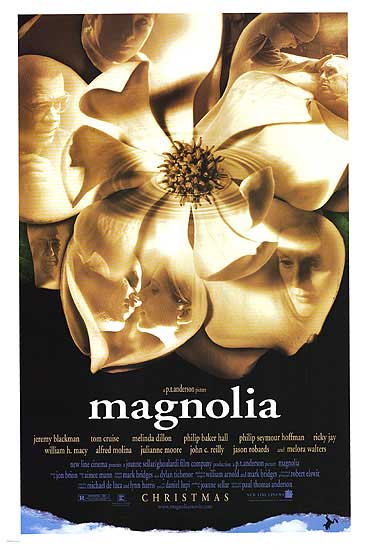