The Purger was my first published story in 2007 and again in 2008. It is presented here for the first time. 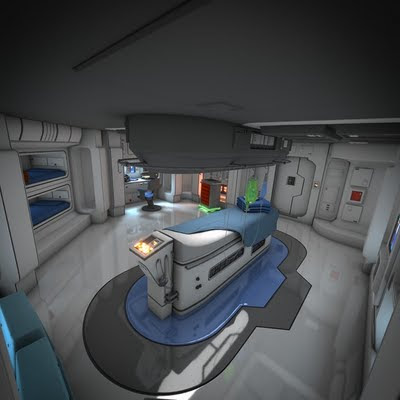 Yakob³ was a traditional flesh chemist. He was proficient, but not because he enjoyed helping others. He didn’t care about flesh people. They could not afford biomechanical enhancements and were therefore, sub-standard. Flesh disgusted him.
What he treasured was the purification of the individual. It was his prescriptions which purged patients of their impurities. Converts came to him every day to cleanse the tiny evils that dot the interior, like specks of old cancer. It was Yakob³'s dream to purge the entire Starbase. He was no fool. Nearly half of the population were without biomech aides. It would take him a lifetime, but with every case, he garnered new pleasures.
He had discovered that with so many flesh vermin passing through his confined business, impurities would find their way into the circulation. Minimising his oxygen intake had proven to be unsuccessful. By the end of each day, his thought processes had begun to decay. He would rush home and seal himself into his pristine cublica, circulating a purifying concoction of his own design. From there he began the ritual of cleansing. He would follow it with a dose of proto-pellets and in most cases, this would see him true until rejuvenation.
Nevertheless, he would dream of extraordinary filth. Transported to a dark world, stumbling naked and dirty through mountains of rubbish; toothless flesh people slithered on piles of effluent and decaying tissue. Toxic rain sizzled on his skin. Jets of vomit fell from his stinking orifice. He sank into the slush until he was submerged where multitudes of hungry parasites sucked the meat from his bones... 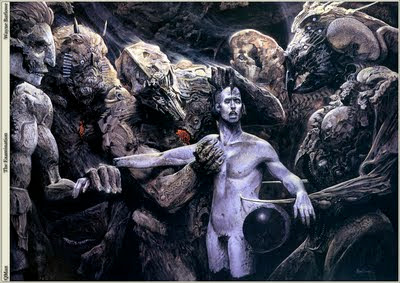 When Yakob³ woke before First Call, he was trembling, withdrawing. He sprang into action. He barely arrived at the sanitiser before the structo-organisms could drain his glands. Afterwards came extraordinary relief — a euphoria, almost sexual — a throwback to sapien days. He cleansed his smooth and hairless body for an hour. He dressed, ate, and with the greatest relief, once again felt purged.
Everyone should feel this way. He'd purge them all. And he had only just begun.
He opened the business, fantasising about new conquests for the day.
Minutes later, a clownish figure strolled in, targeting him. It beamed a toothy, decaying scrawl: ‘Death to biomechs!’
Yakob³ was more confused than alarmed.
The clown raised a handmade tool, jagged, and slammed it into the sinews between Yakob³’s shoulder and neck. As it withdrew, blood and bio fluid gushed.
Yakob³ staggered. The tool came down into his body again, and again.
‘Release the flesh!’ The clown scrambled for freedom.
Yakob³ stumbled to Central Terminal. He sat. He vomited.
Onlookers converged.
His body liquids ran — murky and multitudinous. He defecated. He urinated. He had become the flesh mountain of his nightmares. His head swam. Colours seeped into luminous white. It was oddly soothing. He felt almost…tranquil. Almost.
An inner voice, a throwback sapien voice, spoke truths. He had been wrong. Bioenhancements were the stuff of pollution. The flesh was meant to be free.
At last, he was truly purged. 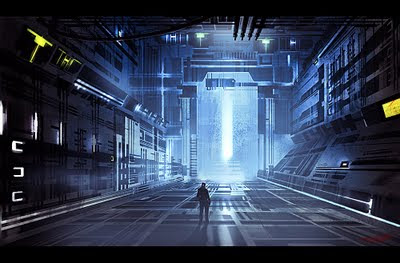