Actually the good news came first but who wants to end on a downer?
The Bad
The day before I brought my partner home from hospital, my grandfather was diagnosed with a terminal illness and went into hospital. The day after I brought my partner home, I managed to speak to him on the phone and told him how I felt. He was 89, but sharp and good humoured to the end. He died a day later.
My father and his brother rushed up (live 700kms away) but were unable to get there in time. However the funeral was rushed forward so that they could attend. My grandfather only wanted a simple service, but wants his ashes scattered in the Victorian Grampians (mountains), which will happen later. The three of us drove the 3 hours to the service then back to Sydney. This all during the week that my partner requires me for absolutely everything, as she is in a wheelchair. It's been a crazy week. 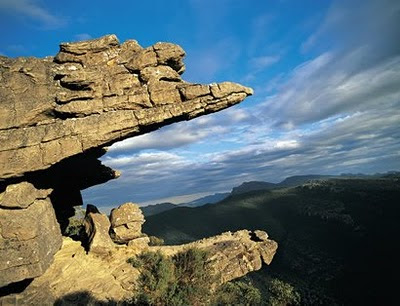 The Grampians
My grandfather was healthy (up until the last few months) and of sound mind to the end. This is what I wrote and read out at his service.
Every so often
We are reminded of the shortness of Life
And its fragility
And when we witness the passing of someone dear
we are humbled by its power
For we are so tiny so innocent
And at its mercy.
We must be thankful for the days we see
For the experiences we gather
for the friendships we share
for the family's we create
They are precious
For our time will come also
and may we be as blessed and as loved as we have witnessed these past days
With our dearly loved Stanley.
His openness to the possibilities of Life were inspiring
He was scared, yet he kept his humour
Somehow
Knowing what was to come.
He was blessed with the longevity of life
And he knew this
That's not to say it was all roses & laughter
It was not without stress or strife
But there were many great memories that he left behind
If we remember him, it's usually with a smile
As he was always smiling and quick with a quip or joke
And that says volumes about the type of person he was.
E E Cummings, who was a poet and playwright said, The most wasted of all days is one without laughter.
Friedrich Nietzsche the German philsopher once said: And we should consider every day lost on which we have not danced at least once.
And we should call every truth false which was not accompanied by at least one laugh.
Stanley danced (in his own way) and laughed every day, and for that, his life was rich. His life was full. And that is as much as anyone could ask out of life. 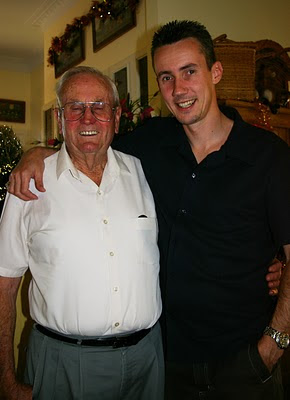 (2005) The Good
Just when I beleived that every literary submission I made was somehow sucked up into a cyber void, I finally had a story accepted for publication. It's for a regarded Anthology, only printed up once a year, and also a special 25th Anniversary edition, so I feel honoured. Honestly, it couldn't have come at a better time. I really needed some good news. I'll provide a link when it comes out if you're interested, which will be later in the year. Things are still very hectic at this end, but will endeavour to post once a week, and will try to get to your blogs when I can.
Coming Soon,
Greatest Written Films
A Classic
https://www.anthonyjlangfordbooks.com/
Posted by Anthony J. Langford