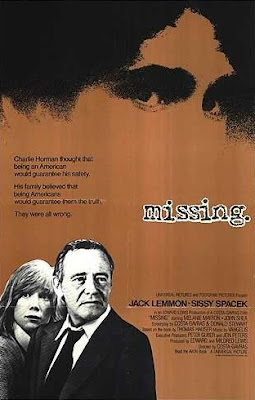 Missing is a 1982 film of the true story of a young writer, Charles Horman who is temporarily based in an unnamed South American country (it was Chile in 1973) when a military coup tears the country apart. Charles goes missing along with a few other Americans (mainly journalists) and thousands of locals, leaving his young wife Beth, played brilliantly by Sissy Spacek, to try and track him down without getting herself killed. She is soon joined by her cantankerous father-in-law, Ed Horman (Jack Lemmon). 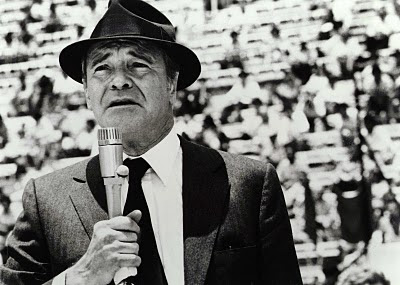 The deeper they dig, the more the suspicion grows that the American Embassy is giving them the run-around, implicating the US government of playing a part in Charles' disappearance as well as having something to do with the coup itself.

The film was shot in secrecy in Mexico by Greek director, Costa-Gavras, as the topic was so controversial. The U.S. Ambassador portrayed in the film sued Universal Pictures for $150 million, but the case was later dismissed. The Horman's also acted as guides on the film, giving it authenticity.

The real horror is of course, the many thousands who went 'missing' and the fact that General Pinochet who became the country's president after the coup, was never held accountable for committing mass murder (though the Brits made a half hearted attempt) and he died in 2006. 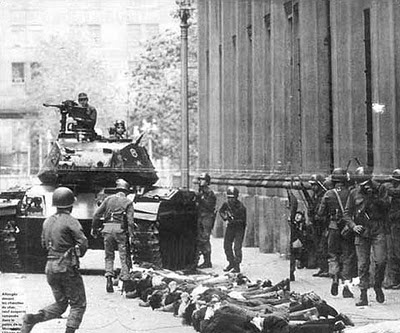 Personally I recall the 1987 U2 song, Mothers of the Disappeared, (see the excellent clip below) which speaks about Pinochet's crimes in a heartbreak way, while Vangelis produced the actual soundtrack.

The direction is a little flat at times but brilliantly captivating in others, yet this series On Greatest Written Films is a homage to writers, being about story and script first. Missing succeeds as a gripping, moving story, with great performances by Lemmon and Spacek, made more tragic by its truth.