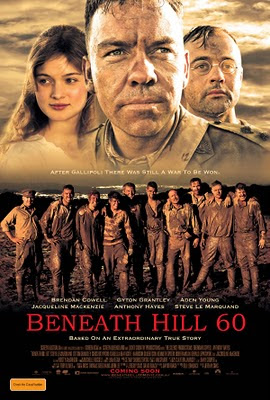 The successful man will profit from his mistakes and try again in a different way.
- Dale Carnegie

'Beneath Hill 60' is a true story based on a front-line campaign in Belgium in 1917. This is a war film unlike any other. Not at least that it is about Australian soldiers in a predominately British campaign. There were many others who fought in both World Wars, though you wouldn't know it from most big budget war films we are used to seeing.

Oliver Woodward (Brendan Cowell) is a late inductee into the campaign on the front who must prove himself to his fellow Aussies who have been in the trenches for some time. It's literally hell on earth. But these soldiers belong to a special unit. The tunnellers. Their job, to subvert the enemy from beneath. They are soon sent to one of the great Fronts of WW1 in Belgium, to an area known Hill 60 which is currently dominated by the Germans. There is a plan in place, but can they pull it off? It's claustrophobic. It's tense. There is constant shelling. The guns shots come from nowhere. You can understand how many were driven mad by it. (Shell shock). 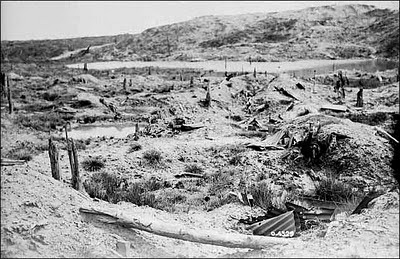 This film works on so many levels. A brilliant taut script by David Roach based on the actual diaries of Woodward who shows us that there is more at stake here than gaining mere inches of ground. There is the tenacity of man. The blunt simple-mindedness which is required to get the job done, but which can also blind some men from the truth. War is stupid. It's a game. And yet they are not merely soldiers but ordinary people. We get an insight into their lives, predominately through Woodward himself, which juxtaposes how horrific war is. We get an idea of the German position too. Often they are faceless enemy's but here we get a little insight into the men on the other side of the muddy walls. 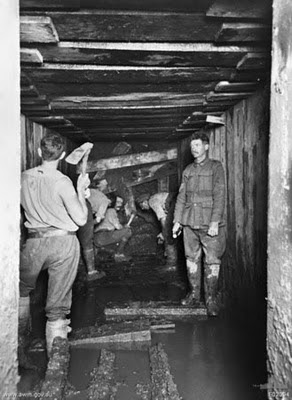 It's a suspenseful film, directed with real flair and I'm surprised to say, mastery of the medium, by actor Jeremy Sims, whose first film, (Last Train to Freo), was rather an languid affair. Once again he works within an tight budget, (like all Australian films, except for that unmentionable one), but he puts you into the mud and the water and the darkness underground. You'll by yearning for your shower, dry bed and a cup of tea; privileges denied to most of these chaps for months at a time. 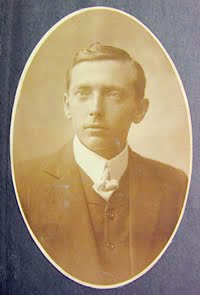 My only criticism is that Brendan Cowell looks too old for the part. He' s supposed to be 25. I could have gone along with it if I'd been told much earlier. But really he is Australia's best actor (Noise, Love My Way) and plays Woodward to perfection.

The supporting cast is also first class. Steve Le Marquand shows his depth and is totally beleivable. It's welcoming to see John Stanton back. We don't see him enough in Australian film. He has a strong presence and that amazing voice. He is an underused icon. I barely recognised Jacqueline McKenzie, who looks ten years younger than she is. She is always a pleasure to watch. Her on screen daughter played by Bella Heathcote is a real talent too though Aden Young's brief odd appearance seemed unconvincing. The tunnellers themselves, all work together to bring a on-screen camaraderie and presence. Credit must go to Sims and Roach for this collective working dynamic. Also noted are the chillingly effective 5.1 sound effects and a classy score by legendary composer Cezary Skubiszewski.

If you are from outside Australia, and don't like war films, it is still effective as a thriller and even a love story. It's highly recommended.
For Australians, it's a must own DVD for every household. Finally, an Australian film to be proud of. And an important one at that.

(I did promise the short story The Workplace Glasshouse this post, but as I have just seen this film, I wanted to review it while still in theaters. If you live in Australia, you better get along quick.)

The Workplace Glasshouse - We've all worked with wankers. But as they say, "People in Glass Houses..."

Coming in June,
A New Series, Feral Street. Pray you never end up there.

Also more in the series of Greatest Written Films, more poetry, flash fictions and Polls. As always, open for suggestions. Comments appreciated. It lets publishers know that people are reading.
Thanks for swinging by.