A look at the diverse mix of stories of Us & Them - something for everyone!

Let's look at the thirteen diverse stories in Us & Them, from true stories to comedies to Oh my God moments and dedications. In order as they appear in the book

One simple song - An eight year old girl decides to write a song for her sick friend. A beautiful story. Dedicated to my daughter Tilly, when she was learning the guitar.

The messiest eater in the world - Inspired by Tilly when she was six. She was messy then. It's a cute story. A comedy with a heart warming ending.

The obligatory obituary (Life after death) - Everyone writes to mourn the loss of Claude but how did he really die? Is the answer in the messages?

Calling time  - A man remembers his life as he mourns the loss of his partner. Dedicated to Michael Sydney Jones

Why did the man with the mullet cross the road? - Based on a true story. A comedy.

The night we should have died - Based on a true story. Unfortunately not a comedy. I should have been killed at seventeen. How we didn't all die is absolutely miraculous.

Formerly known as slut - A woman recalls her life on the streets but she's no victim. She's a survivor.

And the wise man said, I can't be bothered - Four teens meets up in a country town for an afternoon of fun. A comedy inspired by my teenage days.

Racing to see the fall of the Berlin Wall - I visited Berlin to see history unfold in late November in 1989.

Revenge is a dish best served warm - A bitter reality TV contestant decides to get revenge. A comedy

The lost tears of New York  - She stuck out amongst the thousands of strangers on the street. Another true story from when I was backpacking at twenty three. 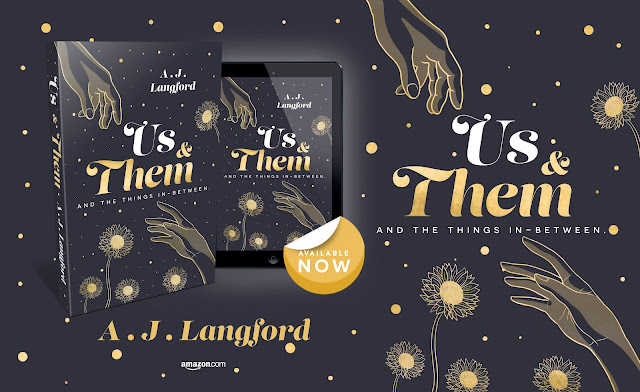 Or signed/inscribed at AJL Books

The perfect gift this Christmas!

Please help me share the word. Simply sharing the trailer would help me out. If this book doesn't do anything, then I will be walking away from book publishing. The amount of time, effort and money I put into it for a small handful of people isn't worth it. It's mostly what it does for me mentally. It's depressing and no way to live. So please... give it a share.

Labels: stories, Story Collection, Us and Them and the things inbetween