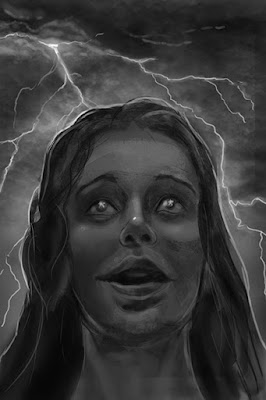 The idea is that she (representing people) has stars in her eyes and is so captivated by the promise of the dream, that she neglects to notice the chaos and danger behind her.

The original title was Stars in their eyes, Glow on the Ceiling. The premise being that the stars turned out to be the fake kind that glow on a kid's bedroom ceiling. (The idea actually came to me while singing my daughter to sleep. She has those fluorescent stars about her room).

The title remained until around March 2017. It was far too long. Hopefully the title as it is combined with the image conveys the message. If not, as long as it entices in some way, I'll be happy.

As for the image, I wasn't entirely happy with her look. So the final image her expression is changed somewhat. Which you'll be able to see soon. And in colour.

What do you think? Does it convey that notion?


After another horrific terrorist event, it's time to offer something positive.
I'll be doing a series of 'up' poetry/quotations.