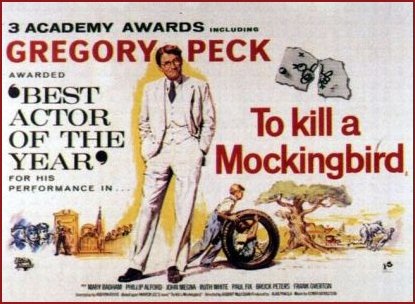 Harper Lee wrote her famous book based on her childhood in small town Alabama; specifically, an event which occurred during that time, in the mid-thirties. It is this nostalgia which drenches the first half of the film version of her only novel, To Kill a Mockingbird. It is endearing without ever being schmaltzy. Most can relate to the wonder and freedom of childhood, and it’s easy to see how adventurous and imagination filled it was for children who grew up pre-television and video games. Something has been lost. Indeed the title itself is a metaphor for the loss of innocence.


The second half of the film is a courtroom drama based on racial prejudice. It centres on a rape case, a black man of a white woman, highly contentious issues at the time of publication, 1960, though the story is set much earlier. Lee was ahead of the game when she began writing essays about racism in the fifties, especially as she was from the South.

The film was released in 1962 by director Robert Mulligan with the screenplay by Horton Foote (which won an Oscar). With the charismatic Gregory Peck in the role of Atticus Finch, it's a dream combination. Peck gives one of his best and certainly his most well-known performance. It also won him an Oscar. He remembered it with reverence. Many say there was no difference between Peck and his character.

Lee was a friend of Truman Capote. She is depicted in the films, Capote and Infamous. Interestingly, she never wrote another novel, and remained out of the spotlight. The character of Atticus was based on her father, who was an attorney. He actually defended two black men accused of murder. After they were convicted hanged and mutilated, he never tried another criminal case.


The film is told with great authenticity, compassion and integrity. It is one of cinema's great stories but carries with it, the all-pervading essence of truth.

For more information about the novel... http://en.wikipedia.org/wiki/To_Kill_a_Mockingbird