Why did the Man cross the road? aka Poo Said That?

Stories About Fuck All and Everything 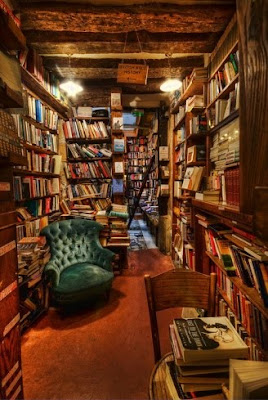 Why did the Man cross the road?

(aka Poo Said That?)

I went to High School in a small town. Once a month a couple of friends and I would catch a bus to the bigger town across the river to do some shopping, for want of a better phrase. I never actually bought many things as my family had little money. That meant I had a less than that, though I did earn pocket money from a few lawn-mowing gigs. I would merely browse at the record store and saved my money for the second hand books from the Book Exchange. I loved them. They may be dusty, musty, torn, yellow pages with a scribble of some oblique gift dedication, but I didn’t care. Science Fiction, Horror, Fantasy, I was a genre Junkie. The problem was I'd be so excited to visit the Exchange that by the time I got there, I needed to crap. My excitement gave me cramps. Not content with a mere calling to nature, my body insisted upon a dramatic and urgent expulsion. Despite my boyhood dreams, I never would have made an astronaut. Of course, there were no toilets nearby and it was often weeks between visits. I literally fantasised about the dusty corner where all my books were, (located just by the Western saloon style wooden swinging doors to the adult section. I never did visit that section though I thought I might when I was old enough. There was curiosity but only after Sci-Fi). 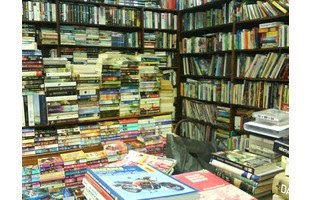 And so I would endure the pain, and trust me, it did hurt. It was a bloody cramp in the guts like Sigourney Weaver’s friend was trying to burst out. I had to rock from side to side to stave off the urges and when that didn't work I would cross my legs and clench my butt cheeks. Why did this happen? Especially when there were so many books to look through. I’d only get to browsing through the second book when I knew I just had to leave. I was forced to make a hasty selection, sometimes on cover alone, pay my dollar and waddle several blocks to the public toilets. It was so touch and go that I didn’t dare run, in case of Mr Peek-a-Boo.

I soon learnt to prioritise my brief schedule. The Book Exchange visit had to come last. On this day, my friends and I were heading to the record store, which didn't have the same effect on me but it was enough to kick-start a wind turbine.
The centre of town was like many middle-sized towns with its long straight criss-crossing streets. We were talking some inane rubbish that most teenagers talk about in groups, when a man who looked like he ate parking meters for a living appeared from between two parked cars and deliberately blocked our path. He looked like he was in his twenties, though anyone older than eighteen was merely an adult and therefore all the same. He had a medium length mullet that was chunky and facial skin that appeared groomed by a tiger. He pointed his fat calloused finger at our faces, especially mine, as I was in the middle of my friends. 'What'd you say about me car?' he said.
Huh? Came three blank but edgy faces.
'I heard what you said!'
'Didn't say...' I replied, just above a whisper. Or maybe just below it.
'I fuckin heard youse! You're lucky I don't punch ya fuckin heads in!'
He looked like he could do all three of us at once, with his arm behind his back. Probably with both arms. His mullet alone could have taken us out.
'If you see that car again you better fuckin watch it!' And then with a final scan of that fat greasy finger he turned and took off back between the cars and made his way across the road.
We looked to each other, totally frazzled. Now that it was over, I felt like I'd already been to the Book Exchange. Mr. Peek-a-Boo was saying hello.
'You must have said somethin!'
‘No, you musta!’
‘I didn’t say anything!’
‘You musta looked at him!’
‘I’ve never seen him before!’
‘His mullet scared me.’
After a triple-round of accusations, we were left alone with the mystery and the memory of that 'near mullet experience.' 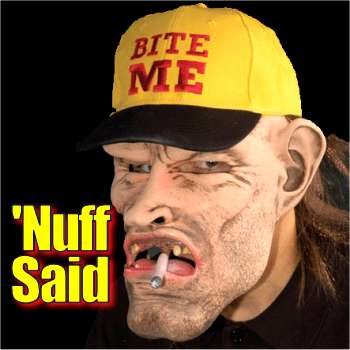 To this day, I don't know what the hell he was talking about. It’s funny how something so ill-defined has stayed with me for so long.

By the way, I still love second-hands books but thank God for the internet. 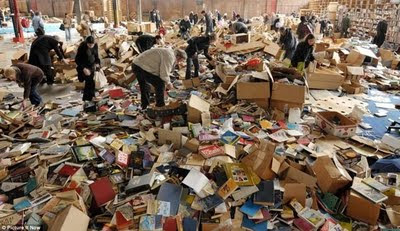 Next week,
A New Poem.

Until then,
Have a great week